Walking into a fancy hotel with a live turkey in your hand might not be what you expect as part of earning a graduate education in agriculture. But such is the life for graduate students like Graham Savio who are working on agriculture development projects abroad.

The turkey was an end-of-the-day gift to Savio from a farmer he visited in Uganda, where the UC Davis student was working on a Horticulture Collaborative Research Support Program (CRSP) Trellis Fund project. The Trellis Fund pairs U.S. graduate students with an organization in a developing country for an agricultural project on fruits or vegetables.

Over the 2012-2013 school year, 14 graduate students working with Trellis Fund projects will have traveled to Uganda, Kenya, Rwanda, Tanzania, Honduras, Nicaragua and Nepal. By the time they have completed their Trellis projects, the students will have shared information with farmers on horticultural crops from mushrooms to bananas, and on topics from pest management to postharvest practices.

In an earlier round of completed Trellis projects, 10 students worked with organizations on projects that reached more than 1,935 farmers.

The Horticulture CRSP has just released a new call for Trellis Fund project proposals and student applicants, as the program prepares to fund a third round of projects that will begin July 1.

“We feel that Trellis is an excellent opportunity to introduce international development to students who may have not considered that as a career,” said Elizabeth Mitcham, Horticulture CRSP director.

U.S. graduate students from the University of California, Davis, Cornell University, North Carolina State University and University of Hawaii at Manoa are invited to apply to be part of the Trellis projects. Selected students will be reimbursed for travel expenses to visit their assigned project and receive a small fellowship for 100 hours of additional project support via email.

At the same time, organizations in 18 developing countries—from Bangladesh to Zambia—are invited to submit proposals for up to $2,000 in funding to conduct adaptive research and outreach on problems faced by local farmers in horticultural production, pest management, postharvest practices, nutrition or marketing fruit and vegetable crops. Proposals must outline the expertise that the organization needs from a U.S. graduate student, as well as goals and activities of the project.

Horticulture CRSP will select up to 12 of the most successful project proposals for funding and then pair a student with related expertise to the project. Project proposals and student applications are due by March 4.

Horticulture CRSP builds international partnerships for fruit and vegetable research in developing countries, and its Trellis Fund projects are a small part of the program’s project portfolio, amounting to approximately 2 percent of its overall research budget.

As a new application process begins, current Trellis projects that started in September 2012 continue on. About half of the graduate students have already traveled for their projects. Reports have been positive. 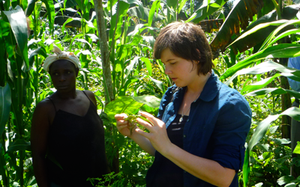 “I was wondering how much of an impact I could actually make, but I was pleasantly surprised,” said A.J. Campbell, a UC Davis graduate student in plant pathology, about her time with a Trellis project. She worked in Uganda on an orange-fleshed sweet potato project, but also helped farmers with diagnosing diseases and other problems in a variety of crops.

“Some of the management practices I suggested they had heard before, but some they hadn’t heard of—or hadn’t heard from a reliable source,” she said. “So I think it helped that the information came from someone with an academic background. It was amazing how much the farmers wanted to cooperate with the organization.”

Bryan Sobel, a Cornell graduate student studying horticulture, is working on a master’s thesis about mushrooms and recently returned from working on a Trellis project with a women’s cooperative in Rwanda, where mushrooms are a particularly high-value crop.

“I could tell that the women were very excited to learn to grow mushrooms and that they recognized this as valuable knowledge,” he said. “I think that I have given them the opportunity to make a difference. You can’t go and make a difference in lives in two weeks. This is their project, and now it is up to them. They’ve already had their first harvest of mushrooms.”

Sobel will continue to work with the project in the following months, as they attempt marketing their mushrooms and address nutrition-related objectives.

“I want to pursue a career in international ag development, so I’m very pleased with this program, to be able to travel and do this type of work,” he said.

Surviving Climate Change and a Pandemic