Challenges arise as groundwater draws down

As the drought of the past four years deepened, Californians have been forced to dig deeper into the state’s groundwater basins. New wells and deeper wells have pressured this “hidden” resource as never before. While everyone hopes for an end to the drought and replenished reservoirs, the problems facing California’s groundwater resources are a persistent challenge.

“We’re seeing groundwater levels much lower in many wells in California than they’ve ever been,” said Thomas Harter, a UC Davis groundwater specialist. “That has consequences: seawater intrusion, pumping costs and the costs of drilling new wells, land subsidence, water quality degradation, surface water depletion, and stress on groundwater-dependent ecosystems.”

Average annual statewide groundwater use is 16.5 million acre-feet. According to a report by the Center for Watershed Sciences, an additional six million acre-feet per year have been withdrawn from California aquifers in recent years to offset surface water shortages. The state has identified 21 groundwater basins and sub-basins that have been significantly overdrafted by excessive pumping. Overdraft is especially evident in the Tulare Lake Basin of the southern San Joaquin Valley.

The Pajaro Valley in Monterey County is an agricultural region that is heavily dependent on groundwater. Pumping water from the ground at a rate faster than it is being replenished has allowed seawater from the Pacific Ocean to enter the aquifer, posing a water quality threat for agriculture and human consumption.

The Pajaro Valley Water Management Agency (PVWMA) partnered with Sam Sandoval Solis — a UC Davis professor of hydrology and a Cooperative Extension specialist — for assistance with the agency’s agricultural conservation program. “The key to agricultural water savings is to water a crop to its evapotranspiration value,” Sandoval said. “This value indicates optimum water amounts that should be applied.”

Sandoval and his research group determined that the Pajaro Valley could save between 4,600 and 5,100 acre-feet of water a year without harming crops. That’s about 10 percent of total water use in this aquifer.

Brian Lockwood, PVWMA senior water resources hydrologist, confirmed that Sandoval’s estimates were helpful in establishing conservation targets. “We have been implementing our basin management plan to try to limit the amount of groundwater overdraft and seawater intrusion,” he said. 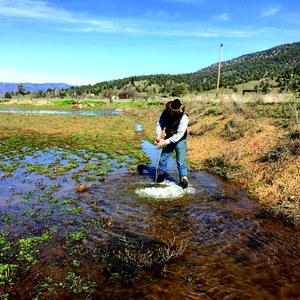 UC Davis scientists worked with ranch manager Jim Morris of Bryan-Morris Ranch to flood alfalfa fields along the Scott Valley River to raise the water table and recharge the groundwater.

Groundwater overdraft can create new water quality problems or make existing problems worse because contaminants travel with falling water tables into deeper wells. Nitrate contamination stemming from fertilizer use is widespread, especially in many rural communities that, unlike most large cities, are totally dependent on groundwater.

Harter and colleagues found that more than 200,000 people using small, household wells in the Salinas and Tulare basins have been affected. In some counties of the Central Valley more than 40 percent of domestic wells are contaminated with nitrate.

Salinity accumulation is another groundwater issue. Sources of salt include soil, irrigation water, animal agriculture, and municipal and industrial wastes. Salinity affects about 500,000 acres of farmland, mostly in the San Joaquin Valley. But it affects urban areas, too.

Land subsidence related to groundwater overdraft threatens the stability of roads, bridges, canals, and other infrastructure.

At the Yolo Bypass near Interstate 5, an instrument that measures land subsidence showed the ground sank by almost a foot in 2014. More recently, a study by NASA’s Jet Propulsion Laboratory for the California Department of Water Resources mapped subsidence in the Central Valley and determined the land is sinking faster than ever before — nearly two inches a month in some locations. Land near Corcoran in the Tulare basin sank 13 inches in just eight months. And a “subsidence bowl” of 14 inches was detected less than a half mile from the California Aqueduct.

“Land subsidence due to groundwater extraction occurs because the clays compact, while sands and gravels do not compact appreciably,” explained hydrogeology professor Graham Fogg. 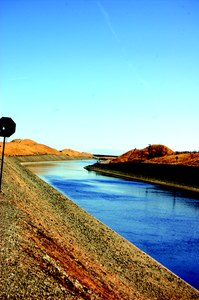 Land subsidence related to groundwater overdraft threatens the stability of roads, bridges, canals, and other infrastructure. Pictured here is the Delta-Mendota Canal, used for irrigation on the west side of the San Joaquin Valley. According to the U.S Geological Survey, land subsidence has reduced flow capacity of the Delta-Mendota Canal, the California Aqueduct, and other canals.

The Scott River in Siskiyou County is a tributary to the Klamath River that provides spawning habitat for salmon and steelhead trout. Keeping summer flows in this groundwater-dependent ecosystem are critical, but water flows during this period are below what they’ve been historically. Portions of the river have dried up on occasion.

“Recharging areas near the stream in the winter and spring is possible because we have lots of surface water available at that time,” Harter said. “We’re trying to keep the water table up high for as long as possible to improve aquifer support for late summer streamflow, when it’s more important for the fish.”