Crude oil toxicity continued to sicken a sentinel Gulf Coast fish species for at least more than a year after the Deepwater Horizon oil spill in the Gulf of Mexico, according to new findings from a research team that includes a University of California, Davis, scientist.

Crude oil toxicity continued to sicken a sentinel Gulf Coast fish species for at least more than a year after the Deepwater Horizon oil spill in the Gulf of Mexico, according to new findings from a research team that includes a University of California, Davis, scientist.

With researchers from Louisiana and South Carolina, the scientists found that Gulf killifish embryos exposed to sediments from oiled locations in 2010 and 2011 show developmental abnormalities, including heart defects, delayed hatching and reduced hatching success. The killifish is an environmental indicator species, or a “canary in the coal mine,” used to predict broader exposures and health risks.

The findings, posted online in advance of publication in the journal Environmental Science and Technology, are part of an ongoing collaborative effort to track the impacts of the Deepwater Horizon oil spill on Gulf killifish populations in areas of Louisiana that received heavy amounts of oil.

Other species that share similar habitats with the Gulf killifish, such as redfish, speckled trout, flounder, blue crabs, shrimp and oysters — may be at risk of similar effects.

“These effects are characteristic of crude oil toxicity,” said co-author Andrew Whitehead, an assistant professor of environmental toxicology at UC Davis. “It’s important that we observe it in the context of the Deepwater Horizon spill because it tells us it is far too early to say the effects of the oil spill are known and inconsequential. By definition, effects on reproduction and development — effects that could impact populations — can take time to emerge.” 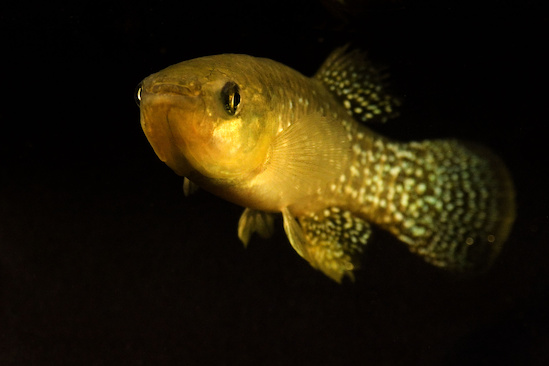 Killifish are abundant in the coastal marsh habitats along the Gulf Coast. Though not fished commercially, they are an important forage fish and a key member of the ecological community. Because they are nonmigratory, measurements of their health are indicative of their local environment, making them an ideal subject for study.

“Our findings indicate that the developmental success of these fish in the field may be compromised,” said lead author Benjamin Dubansky, who recently earned his Ph.D. from Louisiana State University.

Whitehead said the report’s findings may predict longer-term impacts to killifish populations. However, oil from the Deepwater Horizon spill showed up in patches, rather than coating the coastline. That means some killifish could have been hit hard by the spill while others were less impacted.

Whitehead said it is possible that some of the healthier, less impacted killifish could buffer the effects of the spill for the population as a whole.

The research was supported by grants from the National Science Foundation, the Gulf of Mexico Research Initiative and the National Institutes of Health.

The other researchers in the study are Fernando Galvez, associate professor of biological sciences at Louisiana State University; and Charles D. Rice, professor of biological sciences at Clemson University in Clemson, South Carolina. The researchers have tracked the impact of the oil on killifish since the Deepwater Horizon spill occurred in April 2010.

For more than 100 years, UC Davis has engaged in teaching, research and public service that matter to California and transform the world. Located close to the state capital, UC Davis has more than 33,000 students, more than 2,500 faculty and more than 21,000 staff, an annual research budget of nearly $750 million, a comprehensive health system and 13 specialized research centers. The university offers interdisciplinary graduate study and more than 100 undergraduate majors in four colleges — Agricultural and Environmental Sciences, Biological Sciences, Engineering, and Letters and Science. It also houses six professional schools — Education, Law, Management, Medicine, Veterinary Medicine and the Betty Irene Moore School of Nursing.

Read the report
Download photos of researcher, killifish, and embryo