What’s good for adults is not always best for the young, and vice versa. At least that is the case with song sparrows and how they experience the effects of climate change.

What’s good for adults is not always best for the young, and vice versa. At least that is the case with song sparrows and how they experience the effects of climate change, according to two recent studies by scientists at the University of California, Davis, and Point Blue Conservation Science.

Both studies show the importance of considering the various stages and ages of individuals in a species — from babies to juveniles to adults — to best predict not only how climate change could affect a species as a whole, but also why.

“To learn how climate change is expected to affect an individual population, you have to look at demography,” said lead author Kristen Dybala, a postdoctoral scholar in the UC Davis Department of Wildlife, Fish and Conservation Biology. “If you don’t break it down by these different stages, you get a different understanding that may be misleading, or worse, that’s just wrong.”

For example, in the study published in print today in the journal Global Change Biology, climate change had opposite projected effects for adult and juvenile song sparrows in central coastal California. The researchers found, not surprisingly, that adult survival was sensitive to cold winter weather.

“Even though we rarely see freezing temperatures on the coast of California, it was clear that an adult bird’s chances of survival were lowest in the coldest winters,” said co-author Tom Gardali, Pacific Coast and Central Valley Group director of Point Blue Conservation Science.

They expected a similar response from the young. However, warmer, drier winters translated to less food for the juvenile sparrows during the following summer.

“Before they can get to winter, the juveniles have to survive their first summer, when they’re sensitive to how much food is available,” said Dybala. “So as winters get warmer, we expect adults and juveniles to respond in opposite directions.”

In another recent study of song sparrows published in the journal Ecology, lead author Dybala found that parents provided a buffer against the weather for baby sparrows still dependent on them for food. However, independent juveniles that were newly out on their own were more sensitive to changes in the weather because they lacked the skills and experience of their parents. 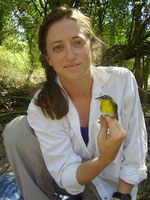 Kristen Dybala, a postdoctoral scholar in the UC Davis Department of Wildlife, Fish and Conservation Biology, with a Yellow-breasted Chat.

While that vulnerability has existed for as long as offspring have been leaving the nest, climate change is expected to exacerbate those already uncertain conditions, Dybala said. This sort of variation in juvenile survival can significantly impact a species’ population growth.

Both studies were conducted at Point Blue’s Palomarin Field Station in the Point Reyes National Seashore in California. While song sparrows are found throughout North America, the local population is nonmigratory, and Point Blue (formerly PRBO Conservation Science) biologists have collected survivorship data on them for 34 years. Dybala combined that information with weather data collected at the field station to see how different weather factors influenced survival rates over the years.

The scientists said that efforts to understand or project demographic responses to climate change could be used to inform climate change adaptation plans, help prioritize future research, identify where limited conservation resources could be best spent and help soften the impacts of climate change for individual species.

The study in Global Change Biology was co-authored by John Eadie of the UC Davis Department of Wildlife, Fish and Conservation Biology; Gardali and Nathaniel Seavy of Point Blue Conservation Science; and Mark Herzog of the U.S. Geological Survey’s Western Ecological Research Center.

The Ecology study was co-authored by Eadie and Gardali.