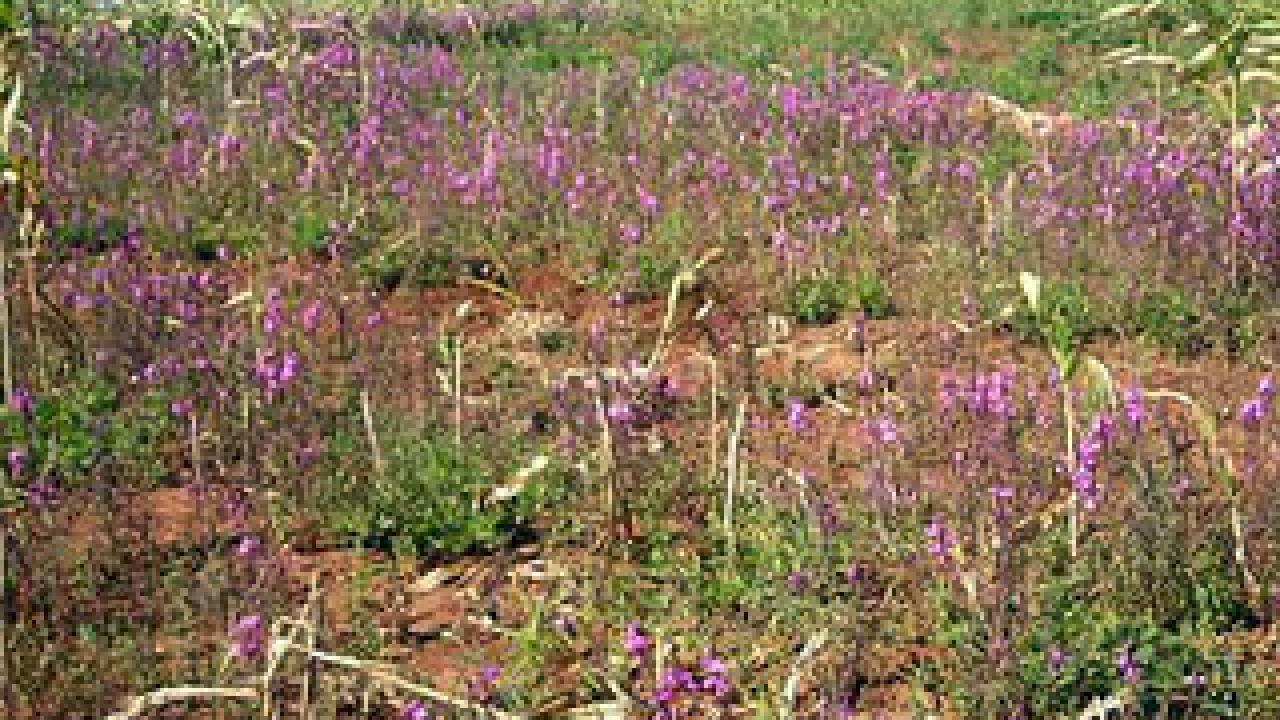 Plant scientist John Yoder is part of an international team using gene sequencing and transfer to break the stranglehold of parasitic plants that cause billions of dollars in crop losses each year.

An international research team, including a University of California, Davis, plant scientist, is using the molecular magic of gene sequencing and transfer to break the stranglehold of witchweed and other parasitic plants that annually cause billions of dollars in crop losses around the world.

Joining forces through the Parasitic Plant Genome Project, funded by the National Science Foundation, UC Davis Professor John Yoder and colleagues are identifying the genome-wide changes that have evolved to equip this intriguing but often devastating group of wild plants to develop their parasitic lifestyle.

“We know that parasitic plants evolved from non-parasitic plants, so we take an evolutionary approach and ask, ‘What are the genetic changes that make a plant parasitic, and what are the genetic consequences once a plant becomes a parasite?’” said Yoder, whose lab in the UC Davis Department of Plant Sciences is contributing to the Parasitic Plant Genome Project. “The next stage is to identify critical parasite genes and pathways and use this information to develop parasite-resistant crops,” he said.

In a May cover article for the journal Molecular Plant-Microbe Interactions, Yoder and co-author Pradeepa C.G. Bandaranayake of the University of Peradeniya, Sri Lanka, demonstrated a new strategy for engineering within host plants a killer DNA molecule that is toxic to at least one species of Orobanchaceae. This family of almost 2,000 parasitic plant species includes some of the world’s worst agricultural pests, notably Striga or “witchweed” and Orobanche, also known as “broomrape.”

Striga, for example, has a reputation for covertly destroying crop fields. By the time the purple flowers of this parasitic weed have bloomed, the field is already ruined. Removed from the soil, Striga can return decades later through dormant seeds. The infestations are particularly devastating to staple crops like rice, maize, millet and sorghum in sub-Saharan Africa and the Middle East.

Because Striga and Orobanche can be so invasive, researchers in the Yoder lab instead use in their studies the closely related parasitic plant Triphysaria, or “dwarf owls clover,” which is native to California.

The recently published study showed that an inhibitory RNA gene-transfer technique could reduce by 80 percent the viability of Triphysaria roots after the parasite has attached to the genetically modified host.

A $3.4 million grant, recently awarded by the National Science Foundation to the Parasitic Plant Genome Project, will enable Yoder and his research colleagues to conduct controlled laboratory experiments that will be followed by field testing in Israel, Kenya or Morocco.

“The next step will be to take the gene that has proven effective against Triphysaria and put it into crops, in particular tomato and maize, to test it against Orobanche and Striga and see if it actually works against real weeds,” Yoder said.

More information about research efforts by the Yoder lab on Orobanche and Striga is available at: http://www.plantsciences.ucdavis.edu/yoder/index.htm.

Other collaborators with Yoder in the Parasitic Plant Genome Project include Professor James Westwood of Virginia Tech, Professor Michael Timko of the University of Virginia and Professor Claude dePamphilis of the Pennsylvania State University.