There’s no better way to get acquainted with a country and its culture than to learn to appreciate its cuisine.

With that thought in mind, UC Davis and China’s Jiangnan University, along with China’s Ministry of Education, are establishing the world’s first Confucius Institute devoted to Chinese food and beverage culture on the Davis campus.

You’re invited to attend the new institute’s public opening celebration, complete with song and dance by performers from China, at 8 p.m. Monday, Sept. 16, at UC Davis’ Mondavi Center for the Performing Arts. Admission is free and visitor parking is $8. More details are available at the Confucius Institute at UC Davis website.

There are 90 Confucius Institutes throughout the United States — including four others in California at UCLA, Stanford University, and San Diego and San Francisco state universities. Worldwide there are 400 Confucius Institutes but the UC Davis institute will be the first to use food and beverage as a way to engage the public in learning more about Chinese culture and language.

“Food brings all of us together,” said celebrity chef and restaurateur Martin Yan, who earned bachelor’s and master’s degrees in food science from UC Davis. “Food is also history, culture, anthropology.… From studying food, from enjoying food, we can talk about tradition, heritage.… Food is a reflection of culture, history, religion and many other things,” he said. 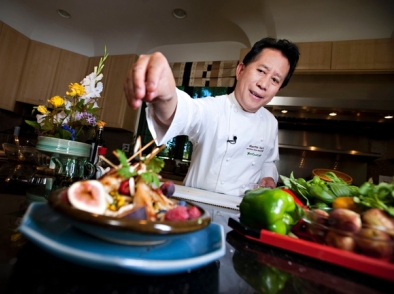 Yan, who will hold a book signing in the Mondavi Center’s lobby at 7:30 p.m., has played a pivotal role in helping to plan for the new institute and serves as one of  its culinary advisors.

Charles Shoemaker, professor emeritus in the Department of Food Science and Technology at UC Davis with extensive experience in China, serves as the director of the Confucius Institute at UC Davis, while Linxia Liang, director for Asian international programs at UC Davis and a scholar in Chinese law, is co-director.

Four visiting scholars from Jiangnan University are working with UC Davis representatives to plan the new institute’s program, which will include opportunities for the campus and greater community to participate in events such as:

The Confucius Institutes were initiated in 2004 by the Hanban arm of China’s Ministry of Education, which since then has partnered with universities and other organizations to establish the institutes worldwide to foster understanding of Chinese culture.

The Confucius Institutes are named for the iconic Chinese philosopher Confucius (551–479 B.C.), whose teachings espoused individual and governmental morality and propriety of social relationships.

This newest institute combines signature strengths of UC Davis and China’s Jiangnan University as world leaders in food and beverage science and technology. In addition to fostering education and research, the institute will encourage conversation between the food and beverage industries of China and California.