Team Henlight — three young UC Davis employees with a vision for boosting global chicken production and food security with a small solar-powered LED light — on Sept. 21 won first place and $10,000 at the international Thought for Food Challenge Summit in Berlin. One of more than 115 teams to enter the challenge, Team Henlight was selected over four other finalist teams that also progressed to the summit, with a team from the Netherlands taking second place.

Sometimes a tiny innovation can crack the world’s toughest problems. Take, for example, a small solar-powered LED light placed in a chicken coop in a developing country.

The light stretches winter daylight hours, boosts the hens’ egg production, puts a reliable supply of nutritious food on the farmer’s table and moves a nation a step closer to food security. 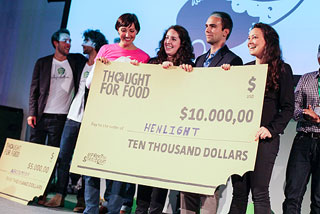 That may leave you breathless, but it’s the meticulously strategized dream of three young visionaries, all affiliated with the University of California, Davis. The trio, calling themselves Henlight, travelled to Berlin Sept. 18 as one of five teams from across the globe competing for investment funding in the finals of the international 2013 Thought for Food Challenge Summit.

Team members are all current UC Davis employees; two are alumni. Emily Sin, is a recent avian sciences graduate who now examines sustainable sourcing of raw agricultural materials for the Information Center for the Environment and Agricultural Sustainability Institute; Edward Silva is a recent international agricultural development graduate who is now program coordinator for the Sustainable AgTech Innovation Center in the Graduate School of Management; and Lorena Galvan is a University of Oregon graduate who is program coordinator for the Central Valley Scholars Program with the Internship and Career Center.

The team’s palm-sized product is a modified version of a light developed several years ago by researchers at the UC Davis Program for International Energy Technologies.  In the summer of 2012, following graduation, Silva and a colleague ran the original prototype through a pilot test in homes located in rural communities near to cities in Zambia. There they conducted research on entrepreneurial and market behaviors related to the light.

Since then, the light has been developed and modified for application in poultry operations, where it can be used to stimulate chickens to lay more eggs — and do so more consistently — during the shorter days of the year.

“Our contribution is in making these techniques available to small-scale farmers by developing a light source that is affordable and appropriate — factors that are vital for successful agricultural innovations,” said Silva, who grew up on a small farm in California’s Central Valley.

“Henlight will increase the value of the individual chicken by sustaining consistent production during the seasons when there are fewer hours of natural daylight and, ultimately, will improve the state of food availability for smallholder farms,” he said.

The hope is that the light will result in greater access to food that is produced using sustainable, localized and energy-efficient methods — without disturbing the chickens’ natural behavior.

“Farmers should receive roughly 40 percent to 80 percent more eggs during periods of shorter day length than they would without using the supplemental lighting,” Silva said. “For a small flock of 10 birds, that can mean up to 40 extra eggs per week during the fall and winter months.”

The team believes that chickens hold a critical role in addressing the world’s challenge to produce massive quantities of nutritionally rich foods while minimizing negative impacts on the environment.

“Consider the merits of poultry: they reproduce rapidly, exhibit an excellent feed-to-meat conversion ratio, have versatile dietary requirements, and are cheap to procure and manage.” Sin said. “From the rural, smallholder farmer to the urban homeowner to the poultry giant — far more people are able to participate in the poultry industry than in any other type of livestock production.”

Team Henlight (formerly Foodisclosure) was one of more than 115 teams that originally entered the first round of the challenge. Also among the original entries was Team UC Davis, composed of students in International Agricultural Development and the Department of Plant Sciences.

Five teams were selected as finalists based on their idea’s ability to create mass awareness about food insecurity, incite social change, be built to last, and disrupt the status quo. In Berlin, the ultimate challenge winner will be selected according to the team’s ability to not only meet the previous requirements, but also demonstrate its practicality, “scalability” and economic feasibility.

The annual Thought for Food Challenge is coordinated through the efforts of a network of individuals committed to tackling the mind-boggling reality of feeding a global community expected to grow to 9 billion people by 2050. The challenge is supported by Syngenta, a worldwide agricultural firm, and The Sandbox Network, which describes itself as “a global community for young entrepreneurial people. (Read more about the challenge at http://www.tffchallenge.com/about.)

(This article is by Pat Bailey, UC Davis News Service.)