For fish and rice to thrive in Yolo Bypass, ‘just add water’

Rice fields in California’s Yolo Bypass provide a bug buffet for juvenile salmon on their journey to the sea, resulting in fat and fast-growing salmon.

From a fish-eye view, rice fields in California’s Yolo Bypass provide an all-you-can-eat bug buffet for juvenile salmon seeking nourishment on their journey to the sea. That’s according to a new report detailing the scientific findings of an experiment that planted fish in harvested rice fields earlier this year, resulting in the fattest, fastest-growing salmon on record in the state’s rivers.

The report, provided to the U.S. Bureau of Reclamation, describes three concurrent studies from researchers at the University of California, Davis, nonprofit California Trout and the California Department of Water Resources. The scientists investigated whether rice fields on the floodplain of Yolo Bypass could be managed to help recover California’s populations of chinook salmon, and if so, the ideal habitats and management approaches that could allow both fish and farms to thrive. 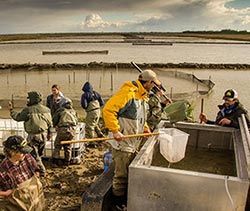 “We’re finding that land managers and regulatory agencies can use these agricultural fields to mimic natural processes,” said co-author Carson Jeffres, field and laboratory director of the Center for Watershed Sciences at UC Davis. “We still have some things to learn, but this report is a big step in understanding that.”

Researchers found that the fish did not have a preference among the three rice field types tested: stubble, plowed and fallow. The food supply was so plentiful that salmon had high growth rates across habitats and management methods.

“It’s like a dehydrated food web,” said Jeffres of the harvested rice fields. “Just add water. All of those habitats are very productive for fish.”

The salmon did demonstrate a preference for habitats with better water flow. Jeffres compared it to choosing among three good restaurants: Each offers good food with hearty portions, but one has better ambience and so is chosen above the others. In this case, the better water flow was the ambience the fish preferred.

Among the key findings:

“These results are good news for the effort to rebuild salmon populations in California,” said lead author Jacob Katz, a biologist with California Trout. “We’ve always suspected that when we mimic natural flood processes in agricultural fields, we give these fish a food-rich habitat they recognize and thrive in. These findings support that theory and provide a strong path forward for California land-use planners, conservationists and farmers alike. This is a win-win model that can be replicated around the state."

The Yolo Bypass is the Central Valley’s largest contiguous floodplain and provides critical fish and wildlife habitat, the report said. It is covered by floodway easement held by the state of California, making other land uses subservient to flood control. Agriculture is a major land use in the bypass, with rice the primary crop.

More than 95 percent of Central Valley floodplain habitat that was historically used to rear juvenile chinook salmon has been altered, primarily diked, and drained for agriculture conversion. Most former floodplain wetlands are now only inundated during major floods. The report said access to floodplain habitats and the high growth rates associated with them during even a limited time may be critical in improving return rates for Central Valley salmon populations.