The gift of music: Grant and Grace Noda

Grant and Grace Noda, friends of UC Davis, lost all their family’s possessions during the Japanese internment after the attack on Pearl Harbor.

But they didn’t lose their love of music or their value of hard work.

“Music has been my life,” said Grace, who was a senior at UC Berkeley during World War II and taught songs to the children who were in the internment camp with her, “so I wanted to leave something when I am gone.” 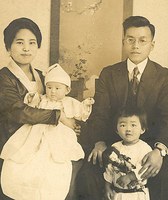 Grace Imamoto Noda is the two-year-old on the right in this 1924 photo. Her mother, Yoshiko, standing at left, holds baby Lily, and father Zenichi Imamoto poses behind Grace.

The Noda family, including daughters Kathy Miura and Tanya Yan, has given more than $1 million — the largest contribution in the music department’s history — to give the gift of music to UC Davis students.

The family’s support, which has inspired others to donate, will allow UC Davis to build a new 400-seat music recital hall that will break ground in May 2014. In addition to providing some much needed classroom space, the building is expected to become one of the most active concert venues in the Sacramento region.

“Rich or poor,” Tanya Yan said, “everyone has access to music.”

Read more about how the Noda family gives back to UC Davis:

This article is part of the “One Campaign, One Hundred Stories” website, featuring people who have transformed UC Davis and made a difference in the lives of people throughout California and the world with their generosity. Grant Noda worked in the Department of Botany, UC Davis, which was part of the College of Agricultural and Environmental Sciences.