For almost 4,000 years people have been breeding dogs for certain traits, such as a temperament suitable for companionship. But the vast number of modern breeds — and the roots of their genetically caused problems — came about over the past two centuries, as dog shows became popular and people began selectively inbreeding the animals to have specific physical features. 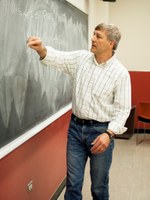 Purebred dogs not only have increased incidences of inherited diseases but also heightened health issues, such as hip dysplasia in large breeds like the German shepherd and the Saint Bernard. Despite the negative effects of controlled breeding, animal science experts point to the value of selecting for consistency.

When choosing a dog as a pet, consumers look to the breed standard for certainty. “They know what it will look like and how it will act,” says UC Davis animal science professor Thomas Famula.

With the search for consistency yielding unforeseen flaws, however, who is to blame? Famula believes dog breeders hold the highest responsibility because they make the decisions about which dogs to mate. “In the end, breeders are the ones creating the next generation of dogs,” he said.

Levi Lewis: The Value of ‘And’