State of the Lake: High (Tech) and Dry at Tahoe 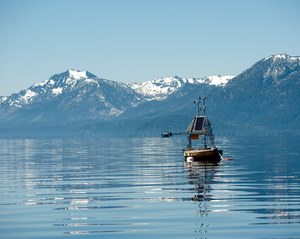 Lowering a white disk off a boat and into Lake Tahoe’s blue waters was once the most widely used indicator of the lake’s clarity and health. Today, the Secchi disk is still an important tool, but 46 years after the University of California, Davis, first began continuous monitoring of Lake Tahoe, an array of new technologies and computer models are helping scientists better understand what has proven to be a complex ecosystem.

These complexities are examined in “Tahoe: State of the Lake Report 2014,” released today by the Tahoe Environmental Research Center at UC Davis. The report explains how drought, climate change, and other natural and human factors are driving changes at Lake Tahoe.

The report also describes a new real-time network of about 20 monitoring stations -- the first six of which are being installed this month -- to explore what is causing degradation to Lake Tahoe’s nearshore environment. In collaboration with public and private property owners, the Real-time Nearshore Water Quality Network will gather minute-by-minute data about changing water quality conditions.

“While this year’s data shows that progress is being made on many fronts, the biggest concern is what is not able to be shown,” said TERC director Geoff Schladow, who will present the report in a public talk tonight, 5:30 p.m., at the Tahoe Center for Environmental Sciences in Incline Village. “This really applies to the nearshore, where most people experience the lake. Even with the planned increase in monitoring, why it is continuing to degrade is poorly understood. I’m hoping the nearshore network will start to fill that void.”

Dry conditions persisted in 2013. The lake level rose by only six inches during the spring snowmelt, one of the lowest increases recorded, and it seems likely that the lake level will fall below the natural rim later this year. Drought conditions also influenced a lower than usual inflow of nutrients, such as nitrogen and phosphorus, from streams for another year.

Lack of rain affected 2013 clarity levels, reducing fine sediment flow into the lake. Clarity in 2013 maintained the recent trend of slowing down the former rate of degradation, with a value of 70.1 feet. (Clarity data for 2013 was released in March 2014 and repeated in this report.) While the annual average clarity was five feet less than the previous year, this decline was mainly due to a wet December in 2012. Summer clarity, the biggest challenge facing Lake Tahoe, was virtually identical to 2012 and improved by over 13 feet from 2011 levels.

“The long-term change in clarity is the result of many peoples’ efforts,” said TERC associate director Zachary Hymanson. “The science community has played a major part, but it needed agency participation, public buy-in, and funding from all levels of government and the private sector.”

By combining a half-century of data collection at Lake Tahoe with climate-change forecasts, scientists found that summer-like conditions have been extended at Lake Tahoe. By the end of this century, summer may be two months longer than it was in the 1960s, and maximum temperatures may have risen by 8 degrees F.

Winter temperatures were significantly colder than normal in 2013, while summer was warmer. As a consequence, the peak in the timing of snowmelt was again earlier than historical conditions.  The July surface water temperature was 65.6 degrees F, the warmest in five years.

“With regard to climate change, we have really only scratched the surface,” Schladow said. “We have little understanding of how extreme events will play out and impact the Tahoe basin and the Sierra.”

One likely effect of longer summers is a reduction in dissolved oxygen at the bottom of the lake. Data shows that this could take between five to 10 years if deep lake mixing was totally absent. It would affect fish life and the chemical balance within the lake. Potential solutions include reducing the flux of nutrients to the lake to reduce algal growth.

Lake Tahoe did not mix to its full depth in 2013, the second consecutive year in which this has not happened. The maximum depth of mixing was only 590 feet, reached in March. The lack of mixing was a result of increasing surface temperatures.

The State of the Lake report informs non-scientists about the most important factors affecting lake health and helps influence decisions about ecosystem restoration and management within the Lake Tahoe Basin.

The 2014 State of the Lake was funded by the California Tahoe Conservancy, UC Davis, and the generosity of supporters who value the role of science to save the lake. TERC partners with other research institutions and with resource agencies in the Tahoe Basin to address the current challenges facing Lake Tahoe.