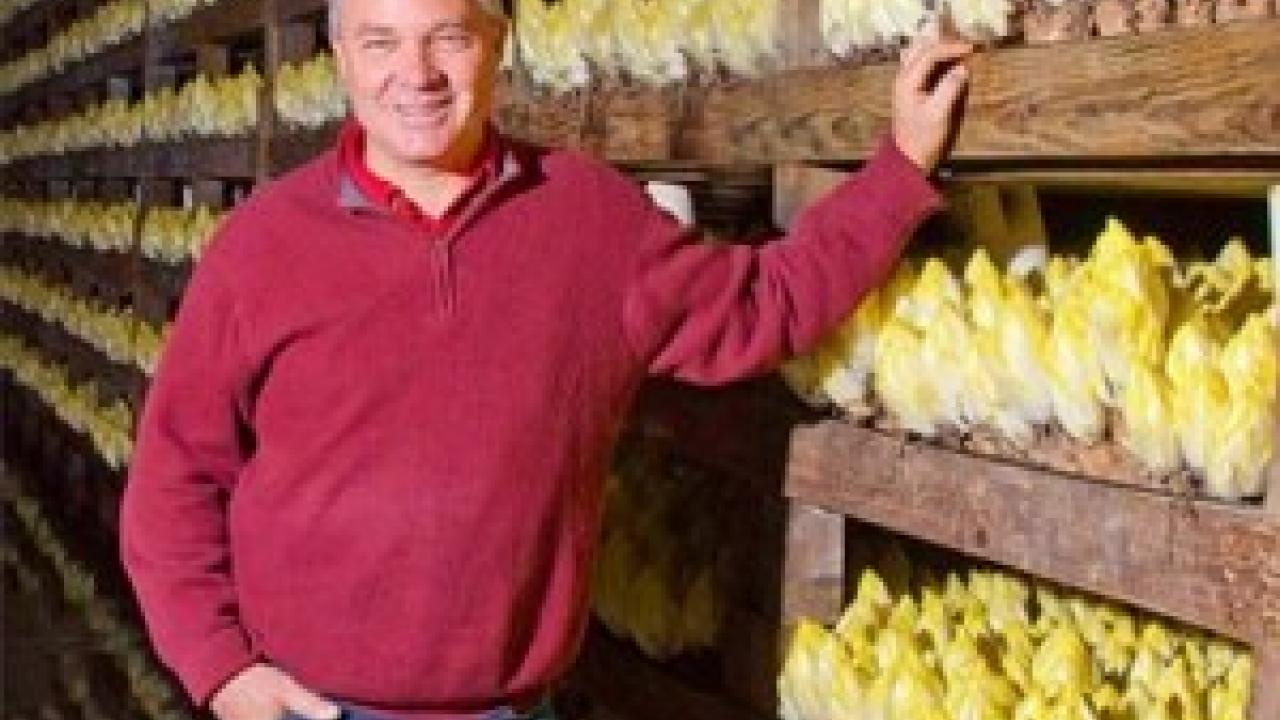 When Rich Collins ’83 was an ambitious beginning farmer with much to learn, it was a fellow UC Davis alum and successful farmer, the late Ton Lum ’50, who helped him get his start by renting Collins five acres of land near Vacaville.

Today Collins runs a highly successful business, California Endive Farms, which produces the nation’s largest quantity of a vegetable that many said couldn’t be farmed in California—a small, torpedo-shaped green that grows in the dark.

In addition to this helping hand from a fellow alumnus, Collins attributes some of his success to the resources he had while studying at UC Davis—in particular, a feasibility study he wrote in his freshman marketing class that focused on a small farming operation he dreamed of creating. It was a plan that he used when founding his now nearly 300-acre farm headquartered in Rio Vista.

“For every aspect of my project that I worked on, I could go talk to a marketing person, a vegetable crop person, an agricultural economics professor, numerous plant pathologists, an ag engineer—and I did. It was wonderful to have that access,” he said. “I used to hang out in the stacks of the library downstairs. It was so cool to do research, roam around and find these old documents on amazing stuff— agriculture technology, horticulture research, you name it.”

Now Collins is the only commercial grower of Belgian endive in the United States and employs 65 people year-round, including a few UC Davis alumni. As president, with responsibilities ranging from employee management to sales and marketing, he says there isn’t a typical day. There is, of course, one constant.

“We are farmers. Throughout the year we never stop farming,” he said. “We’re always busy; sometimes we’re just super-busy."

Collins hasn’t forgotten Lum’s generous favor that helped him get his start. He’s paying it forward to the next generation of California Aggie farmers. On his own farm, just two miles from the UC Davis campus, Collins has leased land to two alumni, both of whom are working to grow a variety of fruit and vegetable crops while gleaning knowledge from Collins’ 30 years of experience.

“I want to help young farmers like I was helped, and steer them away from problems and toward success,” Collins said.

A year from now, Collins plans to be digging in the dirt on his own farm just two miles west of UC Davis instead of running the endive company. He hopes to focus on improved soil quality, water conservation and land use issues and volunteer with organizations like the Community Alliance with Family Farmers.

“I’ve been growing endive since I was 18 and so it’s time for the next generation to sit in this chair,” he said. “There’s lots of smart, young, capable people to do that. There’s a lot of great talent out there.”