Flooding Farms in the Rain to Restore Groundwater

Despite rain, California is still in a drought. Scientists are banking water as a sunny day fund.

The Central Valley sky was a never-ending expanse of gray. Not a single pixel of blue in sight. Under it, UC Davis scientists were flooding a Modesto almond orchard with half a foot of water. On purpose. In the pouring rain.

It sounds a bit strange, and on Jan. 19, looked even stranger. Yet what they were doing could play a key role in helping the state replenish its parched aquifer after more than four years of drought—and help safeguard the water supply against future droughts.

Despite appearances on that wet, squishy day, California is still in a drought. The UC Davis team and farmer Nick Blom are trying to capture the rain while it’s falling, banking groundwater while they can, knowing drier days lie ahead.

By the end of winter, they will have flooded this five-acre plot four times, for a total of 24 inches of water. Ideally, most of it will infiltrate the aquifer below.

“In a wet year, we can have 15 million acre feet of flood flows in the winter season that are not used right now,” said Helen Dahlke, a professor in the UC Davis Department of Land, Air and Water Resources who is leading the experiment. “They are just flowing out to the ocean. That could be designated for groundwater recharge.”

The Department of Water Resources has identified 21 groundwater basins in California that are in critical overdraft, where more water is being pumped out than is going in. State legislation in 2014 called for better management of California’s groundwater resources, including exploring groundwater recharge methods like this one.

The idea is fairly straightforward: If you apply rainwater to the orchard in the winter, when trees are dormant and not using the water to grow, it will percolate down into the aquifer—a savings account of water for a sunny day. After all, what better time to capture and store water than when it’s cold and raining?

The method may also help alleviate some of the winter flood risk on rivers, which is where this water would normally have gone.

"We have to put that water back in the ground so when we do have droughts, we'll have water to use." - Nick Blom, farmer 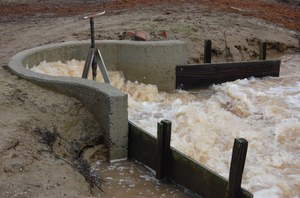 Water floods from a canal pipe into an almond orchard in Modesto as part of an experiment with on-farm flooding.

But several questions remain. First and foremost: Will the method kill the trees? And will it reduce their yield? What are the disease risks? What kinds of crops and soils are ideal for this treatment? Will it increase the amount of nitrate and other pollutants entering the groundwater? On the plus side, might pests overwintering in the soil actually be reduced if they drown during the deliberate floodings?

That’s where UC Davis scientists come in. They are monitoring how quickly the water is infiltrating the aquifer. Sensors measure levels of salt the water may be transporting through the soil. Using a plastic tube buried underground, researchers can take weekly photos of tree roots to monitor for damage. In the spring and summer, scientists will watch the trees for disease symptoms, measure tree “water pressure” to make sure that the roots are healthy, and record the orchard’s yield of nuts.

“When there’s a will there’s a way,” said Ken Shackel, a professor of plant sciences who is monitoring the trees’ health. “ If the trees are OK, then I think there will be the will. But we need a few years of yields to even get an idea of whether this method is sustainable.” 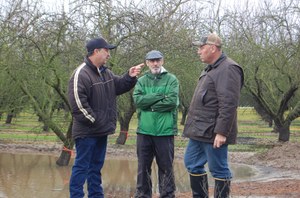 Previously, the scientists tested the flooding treatment on grapes, pistachio and alfalfa and found that flooding in the offseason did not hurt the crops under certain conditions and did increase groundwater levels. They hope to find similar results with this winter’s almond project, which is funded by the Almond Board of California.

Blom, who is also a member of the Modesto Irrigation District, is hopeful that the winter flooding is helping not just the groundwater, but also the orchard itself.

“If we increase yields, that’s the best,” Blom said. “If it only improves the groundwater, that’s a great outcome, too. We have to put that water back in the ground so when we do have droughts, we’ll have water to use.”

Compost Key to Sequestering Carbon in the Soil