Contributions in memory of Nancy Tibbitts, an alumna and much-valued member of the UC Davis community, have been used to establish an endowed scholarship in her honor. The Nancy Rupp Tibbitts Scholarship is for support of CA&ES undergraduates interested in production agriculture, particularly students who have served in agricultural leadership roles. Tibbitts (B.S., ’80, agricultural education; M.Ed., ’92) was an internship coordinator and career adviser at the UC Davis Internship and Career Center. During her 26 years at the center, she guided countless students to internship experiences and productive careers in agriculture and the environment. Together Nancy and her husband, George Tibbitts, a rice farmer, had connections to the agricultural industry that helped her to develop many new opportunities for UC Davis students to get on-the-job experience.

“She had an amazing energy level and a can-do attitude,” said Linda Hughes, who worked with Tibbitts at the Internship and Career Center. “Nancy was also fabulous with students. Many of them would come back to visit her year after year.”

Donations to the Nancy Rupp Tibbitts Scholarship are still being accepted for the endowment. Gifts can be made online at giving.ucdavis.edu/caes/tibbitts. Or contact Melissa Haworth in the CA&ES Dean’s Office at mdhaworth@ucdavis.edu or 530-979-1440. 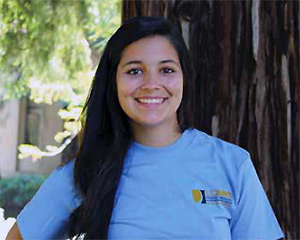 The Barbara O. Schneeman Aggie Ambassador Prize was recently awarded for the first time to Maria Montoya, a senior majoring in animal science who is president of the Aggie Ambassadors. (Courtney Rhodes | UC Davis)

When Barbara Schneeman stepped down as CA&ES dean in 1999, members of the CA&ES Dean’s Advisory Council and other supporters surprised her by establishing an endowment in her honor. The Barbara O. Schneeman Aggie Ambassador Prize is awarded annually to an Aggie Ambassador exhibiting leadership and good citizenship.

Schneeman, now a professor emerita of nutrition, led the college as dean for six years. The Aggie Ambassadors program began in 1998 and has since become a highly successful group of CA&ES student volunteers who travel to high schools, fairs, and trade shows to recruit students and share information about UC Davis.

“I was honored that supporters of the college chose to recognize my term as dean by an award that would nurture and encourage leadership among the Aggie Ambassadors,” said Schneeman. “Their outreach on behalf of the college is so valuable.”

Contributions to the Schneeman Aggie Ambassador endowment are still being accepted to bring the fund above $25,000, which would support a $1,000 annual award. Gifts can be made online at giving.ucdavis.edu/caes/Schneeman, or call CA&ES Advancement at 530-752-1639.