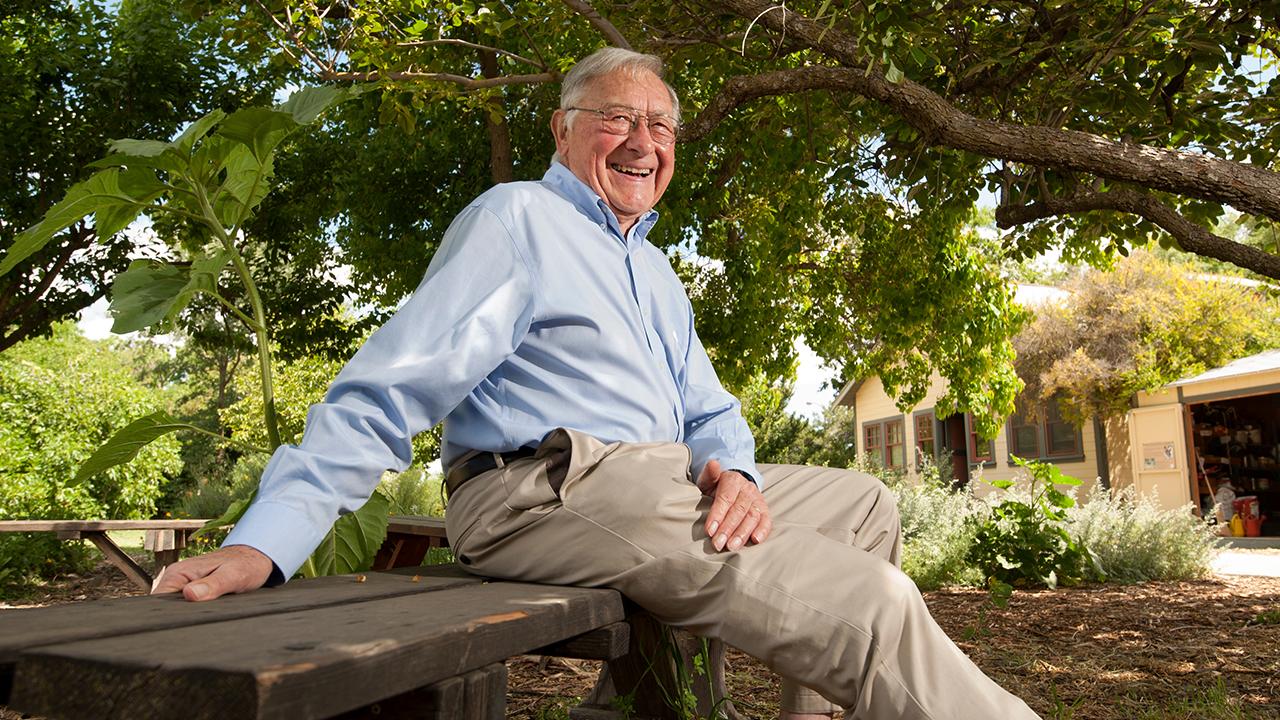 Charles E. “Charley” Hess, a UC Davis Medal recipient and dean emeritus of the College of Agricultural and Environmental Sciences who never took the word “retirement” seriously, died Saturday (April 13) of congestive heart failure at the age of 87.

Saturday was Picnic Day, the biggest celebration of the year at the institution he loved. Two years ago he rode in the Picnic Day Parade as outstanding retiree of the year, an honor bestowed on him by his fellow retirees who took seriously and appreciated his continued service to the campus community.

He had been under Yolo Hospice care at his Davis home, where he died surrounded by family, said his wife, Eva. She said the family is planning a memorial celebration for late May. Dateline UC Davis will post an announcement when the arrangements are final.

Helene Dillard, who studied for her advanced degrees in the College of Agricultural and Environmental Sciences, or CA&ES, during Hess’ time as dean, is now the dean herself — fully cognizant of Hess’ role in the college’s status as a global leader in agriculture.

“We would not be where we are today without Charley’s vision and leadership,” said Dillard, a plant pathologist who was appointed dean in January 2014 a few months before Hess received the UC Davis Medal, the campus’s highest honor. “Charley was a wonderful colleague, an inspirational teacher, a tremendous mentor and a dear friend to our college and the people we serve.”

Hess was the dean when Anita Oberbauer received her appointment to the animal science faculty. “He was a great and kind man,” said Professor Oberbauer, who recently received the UC Davis Prize for Undergraduate Teaching and Scholarly Achievement.

Hess earned a Bachelor of Science degree in plant science at Rutgers University, a Master of Science degree in horticulture and plant pathology at Cornell, and a Ph.D. in horticulture, plant physiology and plant pathology, also at Cornell. He joined the Purdue faculty in 1958, then returned to Rutgers in 1966 as chair of the Department of Horticulture and Forestry. He advanced to acting dean of Rutgers’ College of Agricultural and Environmental Sciences in 1971 and two years later became the founding dean of Rutgers’ Cook College (today known as the School of Environmental and Biological Sciences).

He was a natural in the plant world, born Dec. 20, 1931, in New Jersey, into a family with a nursery business in Wayne. He could have joined the business after college, but the science bug bit him. Still, as an academic and administrator, he developed strong relationships in agriculture at all levels, from small businesses like his family’s, to industry giants — and, of course, with student farmers, too, having been an enthusiastic supporter of the UC Davis Student Farm since its inception in 1977 in his second year as CA&ES dean.

The farm eventually became part of the Sustainable Agriculture Research Education Program that was established later during his tenure as dean. He also participated in the development and funding of California’s Integrated Pest Management Program and the UC Davis Biotechnology Program, and he facilitated the move of the U.S. Department of Agriculture’s Western Human Nutrition Center from San Francisco to UC Davis.

He stepped down as dean, after 14 years, to accept an appointment by President George H.W. Bush to be the assistant secretary for science and education in the USDA, serving from 1989 to 1991. Prior to that, Hess had two presidential appointments to the National Science Board, the governing board of the National Science Foundation.

He was one of the principle architects of the National Research Initiative, which evolved into the competitive grants program of the USDA’s National Institute of Food and Agriculture.

Yolo County farmer Richard Rominger ’49, former deputy secretary at the USDA and director of the state Department of Food and Agriculture, said: "Charley was a much loved and respected leader at the U.S. Department of Agriculture and at UC Davis, recognized for his accomplishments and contributions to the greater world of agriculture, education and science.”

Back on campus, he took an appointment as UC Davis’ first director of international programs in 1992. He officially “retired” in 1994 but kept right on working in international programs until 1998. He would go on to serve as special assistant to the provost and chancellor, 2003-04; and subsequently held temporary positions as chair of the Department of Nutrition and vice chancellor of research.

He was a fellow of the American Association for the Advancement of Science and the American Society for Horticultural Science, and had been inducted into the society’s Horticulture Hall of Fame. The College of Agricultural and Environmental Sciences and the USDA also had honored him for distinguished service.

Advocate for all retirees

He was a strong advocate for retirees’ welfare and had served as team leader for retiree health on UC’s Post-Employment Benefits Task Force.

As a vice chancellor, John Meyer worked closely with Hess on retiree issues. “Charley was the last of a special class of leaders — a leader with not only an amazing intellect but a talent for motivating people through kindness,” said Meyer, who is president of the UC Davis Retirees Association. “He cared deeply about the entire UC community and was so affirming to everyone.”

Hess was a former president of the UC Davis Emeriti Association and former chair of the Council of UC Emeriti Associations, but his advocacy extended to staff, too. He was the first chair of the advisory committee that led to the creation of the UC Davis Retiree Center and was the first recipient of the Charles H. Hess Founders Award in 2016, given by the Emeriti and Retirees associations.

For nearly two decades, he participated in the selection of two students per year to receive the Charles Hess Community Service Awards at CA&ES commencement. He eagerly met with the recipients every year, always very interested to hear of their post-graduation plans and to learn more about their activities and goals. Then he would attend commencement to present the awards, even last year when he needed an escort from his son John to walk to the stage.

He continued to serve the university and attend other events, like the CA&ES College Celebration last fall. And when he could no longer make the trip to campus, he turned his home into a UC Davis outpost, said his wife. Most recently, he hosted fellow faculty members who served with him on a committee to write the Academic Senate’s official “in memoriam” for Elmer W. Learn, professor of agricultural economics and executive vice chancellor emeritus.