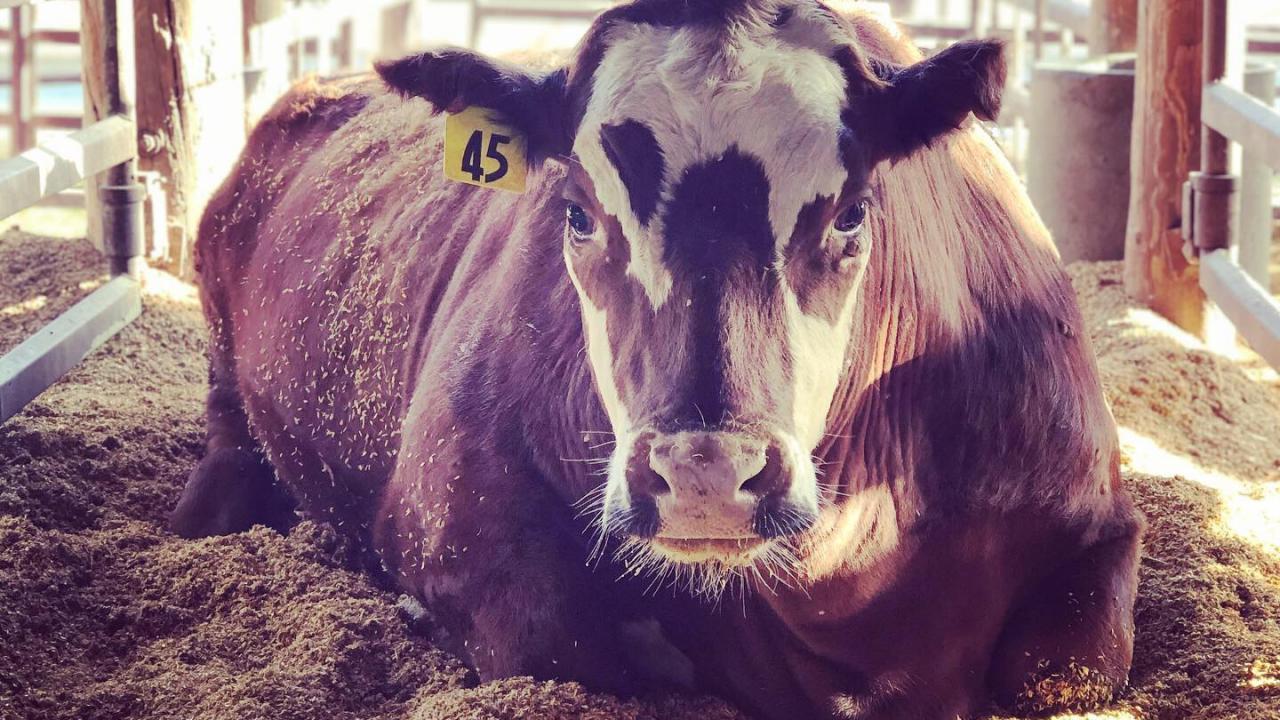 A bit of seaweed in cattle feed could reduce methane emissions from beef cattle as much as 82 percent, according to new findings from researchers at the University of California, Davis. The results, published today (March 17) in the journal PLOS ONE, could pave the way for the sustainable production of livestock throughout the world.

“We now have sound evidence that seaweed in cattle diet is effective at reducing greenhouse gases and that the efficacy does not diminish over time,” said Ermias Kebreab, professor and Sesnon Endowed Chair of the Department of Animal Science and director of the World Food Center. Kebreab conducted the study along with his Ph.D. graduate student Breanna Roque.

“This could help farmers sustainably produce the beef and dairy products we need to feed the world,” Roque added.

Over the course of five months last summer, Kebreab and Roque added scant amounts of seaweed to the diet of 21 beef cattle and tracked their weight gain and methane emissions. Cattle that consumed doses of about 80 grams (3 ounces) of seaweed gained as much weight as their herd mates while burping out 82 percent less methane into the atmosphere. Kebreab and Roque are building on their earlier work with dairy cattle, which was the world’s first experiment reported that used seaweed in cattle.

Greenhouse gases are a major cause of climate change, and methane is a potent greenhouse gas. Agriculture is responsible for 10 percent of greenhouse gas emissions in the U.S., and half of those come from cows and other ruminant animals that belch methane and other gases throughout the day as they digest forages like grass and hay.

Since cattle are the top agricultural source of greenhouse gases, many have suggested people eat less meat to help address climate change. Kebreab looks to cattle nutrition instead.

“Only a tiny fraction of the earth is fit for crop production,” Kebreab explained. “Much more land is suitable only for grazing, so livestock plays a vital role in feeding the 10 billion people who will soon inhabit the planet. Since much of livestock’s methane emissions come from the animal itself, nutrition plays a big role in finding solutions.”

In 2018, Kebreab and Roque were able to reduce methane emissions from dairy cows by over 50 percent by supplementing their diet with seaweed for two weeks. The seaweed inhibits an enzyme in the cow’s digestive system that contributes to methane production.

In the new study, Kebreab and Roque tested whether those reductions were sustainable over time by feeding cows a touch of seaweed every day for five months, from the time they were young on the range through their later days on the feed lot.

Four times a day, the cows ate a snack from an open-air contraption that measured the methane in their breath. The results were clear. Cattle that consumed seaweed emitted much less methane, and there was no drop-off in efficacy over time.

Results from a taste-test panel found no differences in the flavor of the beef from seaweed-fed steers compared with a control group. Similar tests with dairy cattle showed that seaweed had no impact on the taste of milk.

Also, scientists are studying ways to farm the type of seaweed — Asparagopsis taxiformis — that Kebreab’s team used in the tests. There is not enough of it in the wild for broad application.

Another challenge: How do ranchers provide seaweed supplements to grazing cattle on the open range? That’s the subject of Kebreab’s next study.

“There is more work to be done, but we are very encouraged by these results,” Roque said. “We now have a clear answer to the question of whether seaweed supplements can sustainably reduce livestock methane emissions and its long term effectiveness.”

Support for the research comes from Blue Ocean Barns, the David and Lucile Packard Foundation and the Grantham Foundation.