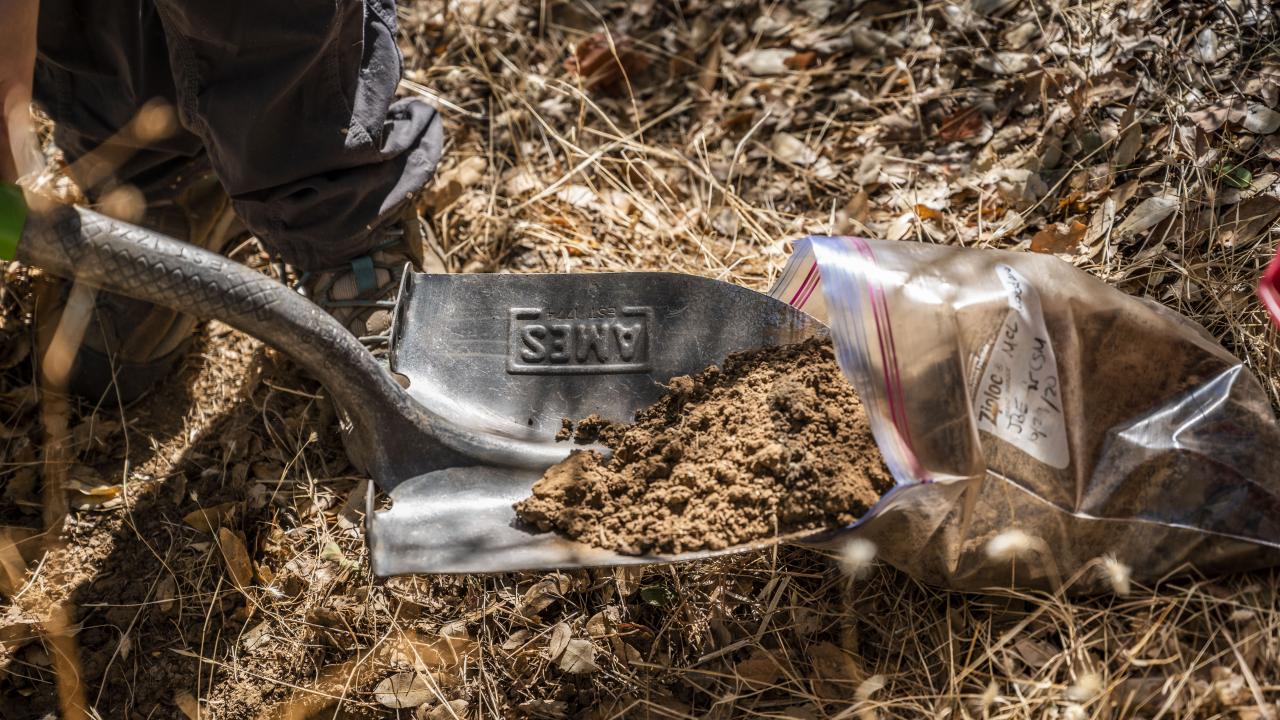 Joanne Emerson is a virus hunter. She has tracked viruses in a hypersaline lake in Australia, analyzed viral communities in the thawing permafrost of Sweden and contributed to studies of oceanic viruses that infect marine microorganisms.

In 2017, she joined the UC Davis faculty as an assistant professor in the Department of Plant Pathology. Emerson now has studies at the Russell Ranch Sustainable Agriculture Facility west of campus and has embarked on a project at the university’s Natural Reserve System to expand knowledge about the little-known world of soil viruses.

“We as a society are starting to appreciate the importance of microorganisms and recognize that not all of them are bad,” she said. “The same is true for viruses. They are just about as numerically abundant and diverse as microbes, but we don’t have a good handle on what they’re doing.”

While viruses may have a bit of an image problem these days, Emerson believes these little packets of nucleic acid play a critical role in the cycling of plant nutrients like nitrogen and the release of greenhouse gases like methane. When soil viruses infect soil bacteria, those bacteria can eventually burst and release their chemical contents into the environment. Ultimately, a better understanding of the complex dynamics between viruses and hosts will provide essential information for improved management of natural areas and agricultural lands alike.

The making of a virus specialist

Emerson grew up near Washington, D.C. and credits inspiring high school teachers and many field trips and museum tours for fueling her interest in biology. A college internship at NASA Headquarters got her thinking about astrobiology and life on other planets.

That experience led to grad school at UC Berkeley and a program studying viruses in extreme environments like those at Lake Tyrrell in Victoria, Australia. She chose this lake, which is about 10 times saltier than the ocean, for her doctoral research because its only inhabitants are specialized microorganisms adapted to extremely high salt concentrations. Work in this relatively simple ecosystem facilitated the development of computer methods to better understand viruses.

“We were interested in how viral communities change over time—something that wasn’t well understood in any ecosystem at the time,” she said. “We learned that these viruses were highly dynamic, and they didn’t usually stick around. We found different viruses every time we went back to the lake, and each virus had its own distinct pattern of abundance.”

These early studies laid the foundation for exploring viruses in more complex ecosystems, with soil being the most complex of all.

As a postdoc, she worked with an international consortium studying permafrost in the peat bogs of northern Sweden, where the seasonal thaw is lasting longer because of climate change. The team’s data confirms what other studies have shown—that a warmer world accelerates the release of greenhouse gases into the atmosphere—and offers insights into the essential role that microbes play in these gas emissions.

Emerson’s team wanted to know how the viral community in the bogs is changing and what that means for carbon-hungry microbes. “We have a number of hints as to what may be happening in these climate-vulnerable ecosystems,” she said. “Viruses are definitely having an impact on the microbial communities involved in releasing methane, for example, by infecting methane-producing microorganisms and by encoding genes for carbon degradation. But it will take some time to gain a predictive understanding of the complex interactions among microbes, viruses and carbon cycling.”

“Because we know so little about soil viruses, our question of first order at the field sites is, ‘How and why are viral communities distinct?’” she said. “By learning what shapes viral communities, we can gain a better handle on which viruses are likely to be where, when and why, and most importantly, which hosts they’re going to infect.”

The NRS study will examine differences between infective and degraded virus particles to establish patterns in soil across diverse ecosystems. The goal is to learn which viruses are infective, which hosts they can infect, and how this changes over time. Scientists want to know what proportion of the virus particles are no longer infective and become tasty carbon, nitrogen, and phosphorous snacks for other microbes.

“We are comparing different climatic and vegetation contexts to see how these conditions affect the amounts and types of active versus degraded viral particles in soil,” she added. “Considering the increase in wildfires in California—including the devastating LNU Complex fire that has affected several of the UC NRS sites—our group is interested in the role that soil viruses might play in post-fire ecosystem resilience.”

Another resource she has tapped into is Russell Ranch, home to much of the university’s sustainable agriculture research. The Emerson Lab crew is studying how viral communities there are influenced by management practices such as fertilization, cover cropping and the use of compost.

“We’re asking similar questions about viruses but in a much more applied sense,” she said. “We want to learn more so we can take advantage of them. Viruses can break open their host bacteria, releasing cellular nutrients, so perhaps viruses could be added to agricultural soils to promote the release of more bioavailable nutrients for crop plants. Viruses can infect plant pathogens, so perhaps viruses could be added to very specifically targeted plant pathogenic bacteria or fungi.”

Learning how to use viruses to give growers new tools to nourish crop plants, promote soil health, and to control pathogens isn’t as far-fetched as it might sound. “We’re closer than I thought we’d be,” Emerson said. “I’m confident that by the end of my academic career, we’ll have a meaningful way to apply this knowledge in agriculture.”