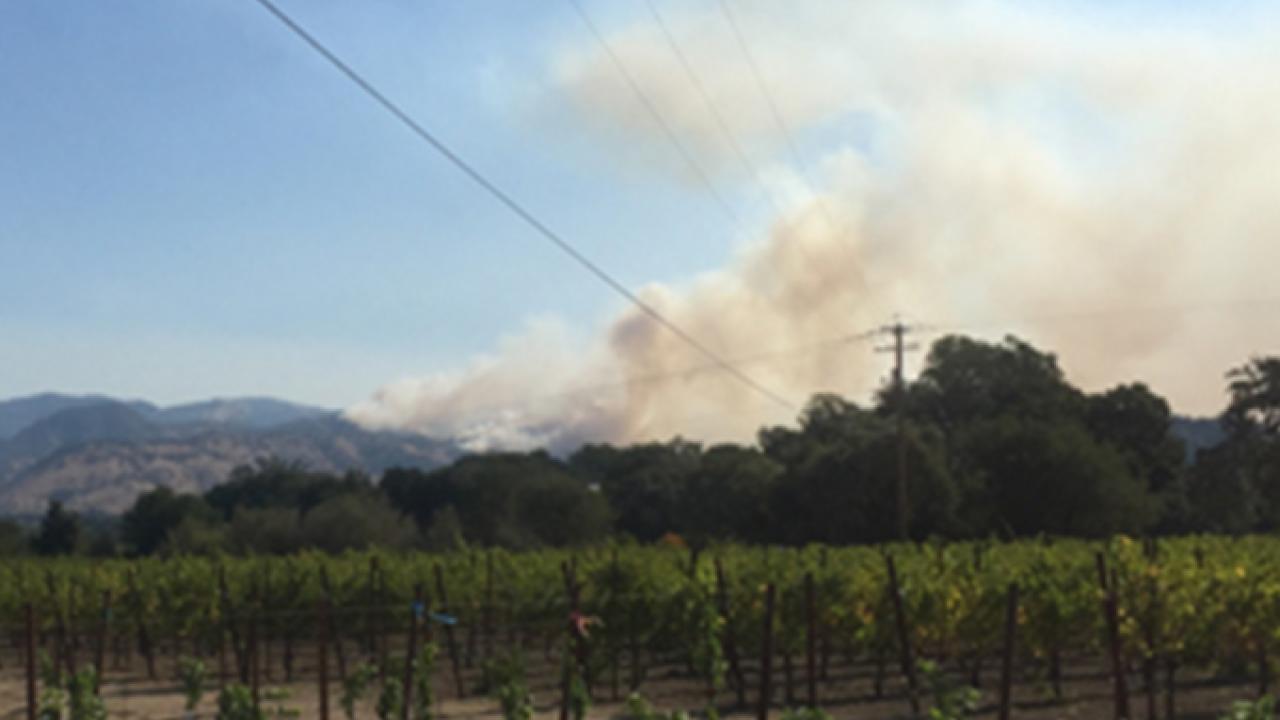 Northern California fires will have some impact on the wine industry

On-going wildfires have created great devastation in Napa and Sonoma Counties and have spread into Mendocino and Solano Counties as well. This region is among California’s best known wine-growing regions and many are interested in how these fires damage the wine industry and affect grape and wine supply and markets.

Most grape and wine production in California broadly and even in the North Coast will not be affected dramatically. Most California winegrapes are in other regions and most of the grapes in the North Coast region have already been harvested. Although devastating locally, a small proportion of North Coast Wineries have been significantly damaged and the wine in process will be continue to be produced roughly on schedule. However, the fires will likely cause a reduced supply and therefore higher prices for some of the most expensive wines, most notably wines made from 2017 Cabernet Sauvignon grapes, some of which have not yet been harvested.

The story is different for the higher-end wines for which Napa and Sonoma Counties are famous.

First consider the wineries themselves. The fires have directly damaged more than a dozen wineries, mostly those in outlying areas that are relatively small. However, there are more than 1900 licensed wineries or wine cellars in the two counties. Therefore, we estimate that despite devastating individual losses, this winery damage likely represents less than one percent of the total Napa and Sonoma processing capacity.

Next consider direct fire damage to vineyards. As of today (early October 12), the fires have been mainly burned grass land and wooded area, especially on the hillsides with little vineyard acreage. Most vineyard acreage is on the floors of valleys, and have not burned. We do not yet have a total of acreage of vineyards lost, but so far it seems to be a small share of the total.

The biggest market impact of the fires may there be from the threat of smoke-taint to unharvested grapes.

Smoke-taint is an off-characteristic created by chemical compounds produced from pyrolysis. These compounds attach to grape skins and, when the grapes are picked and fermented, the resulting wines exhibit unpleasant aromas reminiscent of ash trays. Smoke-taint has been observed in wines produced in Australia and in California following fires near vineyards. Some additional processing, such as filtration and fining, can reduce the amount of smoke-taint in a wine, but such processing generally also removes desirable flavors and aromas, reducing the value of the wine. Thus, grapes in as yet unharvested Napa and Sonoma vineyards will quite probably be affected by the fires, even if the vineyards are not burned.

The Napa Valley Vintners, a trade-association of Napa County wine producers, estimated in a press release on October 11, 2017 that approximately 90 percent of the county’s grapes had been harvested and processed prior to the fires. Unless the winery to which they were delivered was severely compromised, wines from these grapes will not be affected by smoke taint. That leaves the remaining ten percent that are still on the vine. We estimate that almost all the remaining grapes are likely to be of the Cabernet Sauvignon variety, which ripens later than most varieties. To reflect our uncertainly and to be robust to other estimates for Napa we also consider the case for which a higher share of Cabernet grapes remains on the vine.

We expect that most of the grapes not yet harvested will be picked when access to the grapes and processing facilities are available. Thus the harvest workers, the most economic vulnerable people in the industry, will likely have employment opportunities. A bigger problem for farm workers is that the fires have exacerbated an already difficult and expensive housing situation. Any increase in rents will make living and work in the North Coast area even more difficult and expensive.

We use the most recent three-year average of total grape tonnage and of Cabernet Sauvignon in Napa and Sonoma Counties to approximate loss in Cabernet tons for 2017. Figures are derived from the California Grape Crush Reports for 2014, 2015 and 2016.

A rough calculation of the value of the unharvested grapes can be derived by multiplying the affected tonnage by the average price of Cabernet Sauvignon. Napa Cabernet prices have increased from an average of $5,800 per ton in 2014 to $6,845 per ton in 2016 (average prices derived from the California Grape Crush Report, table 10). Sonoma Cabernet Sauvignon prices have risen from $2,565 per ton in 2014 to $2,958 in 2016. We have assumed that prices would have continued to rise and use round figures of $7,000 per ton for Napa Cabernet grapes and $3,100 per ton for Sonoma County Cabernet for 2017.

Even if smoke taint has severe impacts, the revenue loss will not be 100% as the grapes will be fermented, processed to remove smoke-taint characteristics, and then blended with sound wine. Such grapes will be of much lower value per ton and will not enter the higher prices Cabernet Wines for which they would have otherwise been used.

Given a greatly reduced quantity of appropriate grapes available for higher-prices wines we would expect the price of the most highly valued wine from Napa and Sonoma County will rise to ration available quantities. As an illustration, consider the situation in which 25% less Napa Cabernet Sauvignon wine from 2017 were available on the market. Demand for Napa wines is relatively inelastic in that many buyers of that wine do not consider other wines a close substitute. In that case, for example, we might see a Napa Cabernet that would have otherwise had a retail price of $66 to be priced at $100 because so little were available on the market. A 50% reduction in availability of higher-priced Napa Cabernet would cause even higher prices. Similarly, consider if the amount of higher-priced Sonoma Cabernet were reduced by 50%. We expect more substitutability facing Sonoma wines and lower base prices. In this case a $30 bottle of Sonoma Cabernet would rise by 50% to $45 per bottle. Of course, wineries and retailers could choose to keep prices lower as a matter of pricing strategy, in which case the wines would sell out earlier in the year, be sold only in select venues, or be hard to find in the market.

The on-going Northern California wild fires have cost lives, destroyed homes and left thousands of people with devastating losses. The effects on the value of this year’s winegrape harvest is obviously not the most important impact, and even within the grape and wine industry, loss of winery structures and vineyards will have longer-lasting consequences. Nonetheless we believe it is useful to consider potential effects of smoke taint for grape availability and subsequent effects on Cabernet Sauvignon wine availability and prices.