Facts and Fiction on Livestock and Climate Change

As the November 2015 Global Climate Change Conference COP21 concluded in Paris, 196 countries reached agreement on the reduction of fossil fuel use and emissions in the production and consumption of energy, even to the extent of potentially phasing out fossil fuels out entirely.

Both globally and in the U.S., energy production and use, as well as the transportation sectors, are the largest anthropogenic contributors of greenhouse gasses (GHG), which are believed to drive climate change. While there is scientific consensus regarding the relative importance of fossil fuel use, anti animal-agriculture advocates portray the idea that livestock is to blame for a lion’s share of the contributions to total GHG emissions.

One argument often made is that U.S. livestock GHG emissions from cows, pigs, sheep and chickens are comparable to all transportation sectors from sources such as cars, trucks, planes, trains, etc. The argument suggests the solution of limiting meat consumption, starting with “Meatless Mondays,” to show a significant impact on total emissions.

When divorcing political fiction from scientific facts around the quantification of GHG from all sectors of society, one finds a different picture.

Leading scientists throughout the U.S., as well as the U.S. Environmental Protection Agency have quantified the impacts of livestock production in the U.S., which accounts for 4.2 percent of all GHG emissions, very far from the 18-51 percent range that advocates often cite.

Comparing the 4.2 percent GHG contribution from livestock to the 27 percent from the transportation sector, or 31 percent from the energy sector in the U.S. brings all contributions to GHG into perspective. Rightfully so, the attention at COP21 was focused on the combined sectors consuming fossil fuels, as they contribute more than half of all GHG in the U.S. 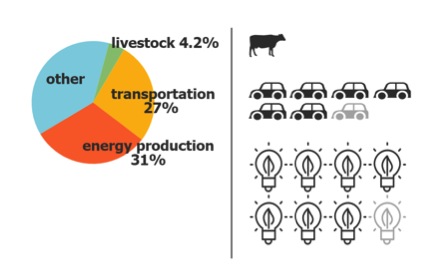 It is sometimes difficult to put these percentages in perspective, however. If all U.S. Americans practiced Meatless Mondays, we would reduce the U.S. national GHG emissions by 0.6 percent.

A beefless Monday per week would cut total emissions by 0.3 percent annually. One certainly cannot neglect emissions from the livestock sector but to compare them to the main emission sources would put us on a wrong path to solutions, namely to significantly reduce our anthropogenic carbon footprint to reduce climate change.

In spite of the relatively low contributions to total GHG emissions, the U.S. livestock sector has shown considerable progress during the last six-plus decades and commitment into the future, to continually reduce its environmental footprint while providing food security at home and abroad. These environmental advances have been the result of continued research and advances in animal genetics, precision nutrition, as well as animal care and health.

Since the 1950s, the carbon footprint of the U.S. beef and dairy sector has shrunk as production increased or stayed the same.

Globally, the U.S. is the country with the relatively lowest carbon footprint per unit of livestock product produced (i.e. meat, milk, or eggs). The reason for this achievement largely lies in the production efficiencies of these commodities. Fewer animals are needed to produce a given quantity of animal protein food, as the following milk production example demonstrates:

• India’s average milk production per cow is 2,500 lbs. milk/cow/year, increasing the methane and manure production by a factor of nine times compared to the U.S. cow. As a result, the GHG production for that same amount of milk is much lower for the U.S. versus the Mexican or Indian cow.

Production efficiency is a critical factor in sustainable animal protein production and it varies drastically by region. 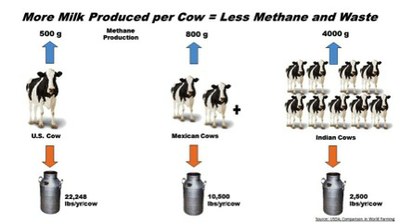 The 2050 challenge to feeding the globe is real. Throughout our lifetime, the global human population will have tripled from three to more than nine billion people without concurrent increases of natural resources to produce more food.

Our natural resources of land, water and minerals (fertilizer) necessary for agricultural production have not grown but in fact decreased. As a result, agriculture will have to become much more efficient worldwide and engage in an efficient path similar to the one it has traveled down in U.S. livestock production in recent decades.

How can emissions accurately and fairly be assessed to lay ground for a path for solutions?

In its quest to identify a sustainable, scientific path toward fulfilling the future global food demand, the Food and Agriculture Organization of the United Nations (FAO) has formed an international partnership project to develop and adopt a “gold standard” life cycle assessment (LCA) methodology for each livestock specie and the feed sector.

The ‘Livestock Environmental Assessment and Performance Partnership’ (LEAP), engaged with more than 300 scientists from the world’s most prestigious academic institutions in this unprecedented effort to develop a global benchmarking methodology.

The first three-year phase project was finalized in December 2015 with six publically available LCA guidelines. This globally harmonized quantification methodology will not only allow the accurate measurement by livestock species and production regions across the globe today, but will also identify opportunities for improvement and the ability to measure that progress in each region going forward.

Addressing the 2050 challenge of supplying food to a drastically growing human population can sustainably be achieved through intensification of livestock production. Indeed, intensification provides large opportunities for climate change mitigation and can reduce associated land use changes such as deforestation. Production efficiencies reduce environmental pollution per unit of product.

The U.S. livestock, poultry and feed industries are one of the most efficient and lowest environmental impact systems in the world. The research, technologies and best practices that have been developed and implemented over time in the U.S. can also be shared with other production regions around the world.

It is important to understand that all regions have unique demands and abilities, and so require regional solutions. However, the advances in the U.S. agriculture and food system can be adapted within these regional solutions.  These significant environmental advances and benefits are in addition to the well-documented human health and developmental value of incorporating animal protein in the diets of the growing population.

The livestock sector is committed to continuous improvement of their environmental impact in North America, and to doing its part in transferring knowledge, technologies and best practices to enhance global environmental livestock impact by region.

Now is the time to end the rhetoric and separate facts from fiction around the numerous sectors that contribute emissions and to identify solutions for the global food supply that allow us to reduce our impact on the planet and its resources.

Frank Mitloehner is a professor of Animal Science and Air Quality Specialist at UC Davis. He recently concluded chairing a Food and Agriculture Organization of the United Nations committee to measure and assess the environmental impact of the livestock industry.