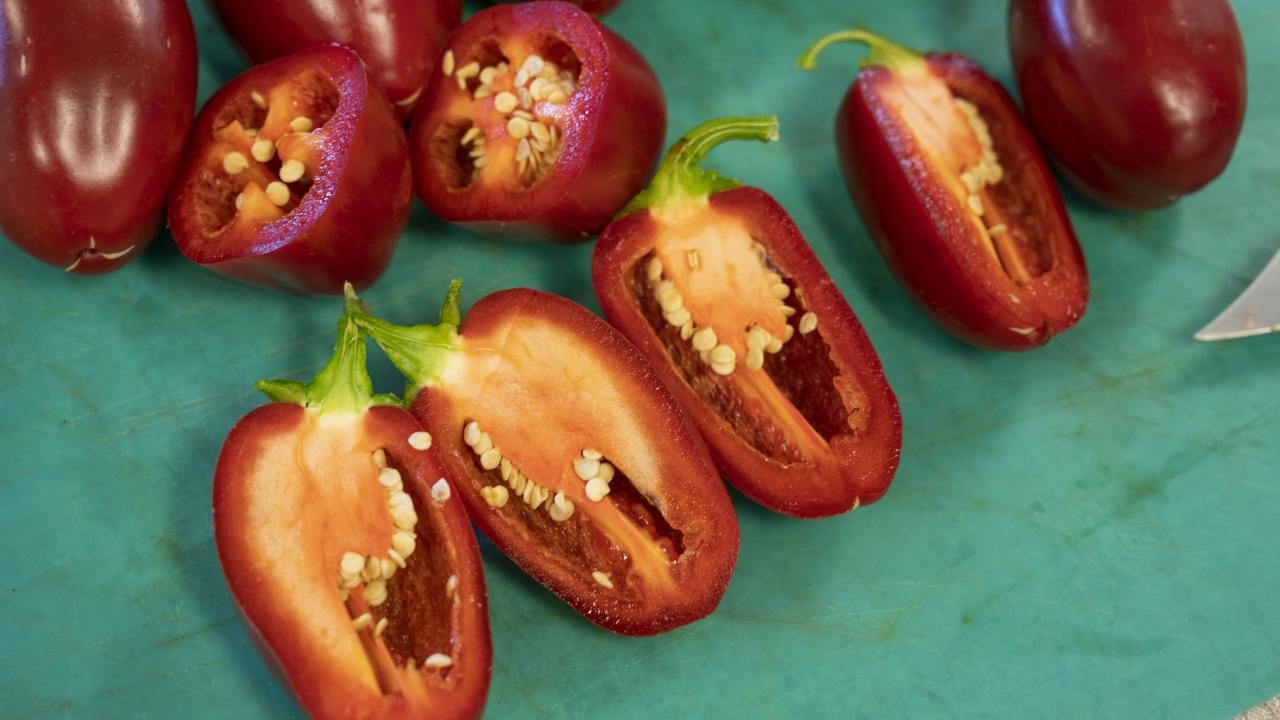 Student plant breeders at UC Davis are getting closer to releasing a new variety of jalapeño pepper designed to elevate a popular appetizer dish. Nearly 10 years ago, students launched a project to breed a pepper with the taste and texture of a jalapeño, combined with an enlarged cavity like a bell pepper, to create the ideal fruit for making hearty jalapeño poppers.

Laura Roser, who graduated from UC Davis in 2019 and is now working full time as a junior specialist for SCOPE, has been involved with the process of crossing jalapeños and bell peppers to develop what has been dubbed a line of “jalapeño poppers.” Over the years, Roser and other students have helped make selections with the peppers they liked best in terms of taste, texture, size and shape.

“It’s been 10 generations since the initial cross of our jalapeno popper line,” Roser said. “It’s been six generations for our other bell pepper breeding lines. Because they’re inbred lines, you can save seeds each year and get a consistent product, unlike a hybrid. In most seed catalogs, they would be referred to as ‘open pollinated.’ These two lines are essentially ready to release as a variety at this point.”

Roser says after years of evaluating the varieties in the field and in the kitchen, the group of breeders with SCOPE have two popper breeding lines that they’re most excited about. Charlie Brummer, professor and director of the UC Davis Plant Breeding Center, believes both varieties show great promise.

“We’re at the point now where we have the data and pretty compelling information that shows that these are worthy of moving forward,” Brummer said.

“The early jalapeño is a little smaller and is moderately spicy like what you’d expect a jalapeño to be,” Roser explained. “Then our breeding line for the jalapeño popper pepper is a little fatter, but similar length and it’s a little less spicy. Then we have another breeding line that is a little too big to be a jalapeño, we think, it’s more like an Anaheim pepper-type, but we really like it, and it tastes really good. It has a little more of a kick to it than our other lines.”

The chefs cut each pepper in half lengthwise, took off the stems, removed the seeds and then stuffed the bold red fruits with a three-cheese blend of parmesan, cheddar and cream cheese. The peppers were covered with Panko breadcrumbs and deep fried. The result was a spicy, creamy and crunchy bite-sized jalapeño popper.

Roser says the next step in the process is to see how well the pepper selections grow at multiple farms in the area. After that, they hope to pitch the product to seed companies.

“We’ve been testing our lines at a variety of different farms around Yolo County, but we want to expand that next year,” Roser said. “We also want to send seeds from these lines to different seed companies that might be interested in partnering with us. Hopefully we can get a seed company to agree to market it and sell it for us as soon as 2022 or 2023.”

Past and Future Breeding

In 2020, the breeding program released six new varieties of organic beans that proved to be sustainable, high-yielding and disease-resistant. Brummer says the release has been a success, with several local bean growers taking interest in the new varieties. He hopes there will be a similar outcome with the line of jalapeño popper peppers.

“The hope is that it gets out there and people grow it,” Brummer said. “We’re getting toward the end of another product coming out which would be pretty exciting.”

The newest breeding project with SCOPE is focused on zinnia flowers. Students created a flower bed last summer at the Student Farm that included 38 varieties from three species of zinnias. Antonia Palkovic, associate specialist with SCOPE, says there was a big interest by local organic growers to develop a new zinnia variety in novel colors with improved resistance to powdery mildew.

“There are a lot of local flower growers and arrangers in the area doing organic production who are looking for more sizes and colors and that have mildew resistance,” Palkovic said. “It’s one of the flowers that produce really well despite the heat, but it struggles with powdery mildew in the fall.”

Developing new peppers, beans and flowers not only benefits organic growers in California and beyond, but it also provides important skills for those pursuing plant breeding careers. It has for Roser, who is looking forward to sharing the fruits of their labor.

“It’s been a very valuable experience for me to grow as a person through this project,” Roser said. “All these years we’ve spent testing and I get really excited when we harvest the peppers because they actually look like what we want. We achieved our goal. It took years, but we actually did it.”