Researchers are decoding the mysteries of mother’s milk, discovering a wealth of information about how best to feed and protect the human body, lessons that will enhance health not just for infants but for us all.

Preventative medicine: It’s an excellent concept, right? We all love the idea of keeping healthy people healthy. But the truth is, health care in our society is based less on wellness and more on fighting disease.

“That’s where the money is,” said Professor Bruce German with the UC Davis Department of Food Science and Technology and director of the UC Davis Foods for Health Institute. “We invest in the diagnostics and drugs to fight illness. But finding ways to make healthy people healthier – what would that even look like?”

That’s not a rhetorical question for German. For nearly 10 years, German and his colleagues at the UC Davis Foods for Health Institute have been exploring the power of science, nutrition and health. Taking an evolutionary approach, they hunted for a food designed under selective pressure to promote health.
And they found it: mother’s milk.

“Mother’s milk is the Rosetta Stone for all food,” German said. “It’s a complete food, a complete diet, shaped over 200 million years of evolution to keep healthy babies healthy.”

German and his team are now decoding breast milk to better understand its components and why they work so well. They are discovering a wealth of information about how best to feed and protect the human body, lessons that will enhance health not just for infants but for us all.

That makes no sense. Of the 500 calories a lactating woman burns each day to make milk, 10 percent is spent synthesizing something the baby treats as waste. If it didn’t have value to the developing baby, wouldn’t natural selection have discarded it long ago?

“We were gob-smacked when we discovered how much of what lactating mothers produce is indigestible matter,” German said. “What is it? What does it do?”

Turns out, the indigestible matter is a slew of complex sugar polymers called oligosaccharides that are extremely difficult to detect and analyze. Enter Professor Carlito Lebrilla with the UC Davis Department of Chemistry and the UC Davis Foods for Health Institute. Using cutting-edge lab instrumentation, Lebrilla and his team developed new analytical methods to separate, identify and quantify the oligosaccharides in human breast milk.

What do the oligosaccharides do? Researchers theorized they fed bacteria since they didn’t nourish the baby, but what strain of bugs do they feed and why?

That puzzle was solved by Professor David Mills, the Peter J. Shields Endowed Chair in Dairy Food Science with the UC Davis departments of Food Science and Technology, and Viticulture and Enology. Mills and his team pinpointed one particular gut bacterium called Bifidobacterium infantis, which is uniquely able to break down and feed on the specific oligosaccharides in mother’s milk.

So lactating mother’s produce the oligosaccharides to help B. infantis proliferate and dominate, keeping their babies healthy by crowding out the less savory bugs before they can become established, and, perhaps more important, nurturing the integrity of the lining of the babies’ intestines, which plays a vital role in protecting them from infection and inflammation.

“What a genius strategy,” German said. “Mothers are recruiting another life form to babysit their babies.”

Capitalizing on what they’re learning about mothers’ milk, UC Davis researchers are working to promote wellness for humans beyond healthy babies.

Premature infants, for example, are often not healthy babies. They are particularly susceptible to a gastrointestinal disease called necrotizing enterocolitis, which destroys the bowel. Up to 10 percent of extremely premature infants get the disease and up to 40 percent of those with the severest form of the disease die. Researchers at the UC Davis Foods for Health Institute are working with Mark Underwood, professor of clinical pediatrics at UC Davis Children’s Hospital, on a clinical trial giving premature babies oligosaccharides and their corresponding bacteria to see if it can improve their intestinal and overall health.

The researchers believe providing oligosaccharides and specific bacteria could also be used to treat gastrointestinal disease in adults, restoring microbial balance in their digestive tracts.
Similar treatments could soon be used to boost the immune defenses of people with compromised immune systems, such as people with the human immunodeficiency virus (HIV), patients undergoing chemotherapy, the elderly, and others.

It’s too early to know whether healthy adults should add oligosaccharides (or other bacteria feeders) to their diets for preventative health. Scientists can’t even say for sure what a healthy bacterial community in our guts should look like. But one thing is certain, German says.

“Our good bacteria play a much more important role in our health than we realized,” German said.

For treating premature infants and others in need of microbial balance, where are we going to find the oligosaccharides that help the good bugs thrive? Nursing infants can get them from their mother. What about the rest of us? 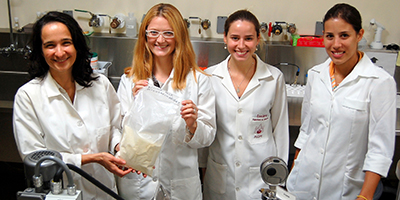 Work by led by Professor Daniela Barile with the UC Davis Department of Food Science and Technology and Professor Juan Medrano with the UC Davis Department of Animal Science demonstrated that cows make the necessary oligosaccharides, although the amounts produced decrease after the cow’s first few days of lactation. Medrano is searching for approaches to selective cow breeding to promote cow oligosaccharide production and to slow the reduction of oligosaccharides with the progress of lactation
Barile and her team are exploring another option, which seeks to turn one industry’s waste into a bacterial treasure. Whey is the waste product of cheese making and it’s produced in enormous amounts. For every pound of cheese produced, 10 pounds of whey are left over. The waste is hard to dispose of – it’s not environmentally friendly – but it still contains oligosaccharides, as Barile and her team have discovered. They are now looking to alter the industrial processing of millions of pounds of whey and other dairy waste, identifying, extracting and delivering health-promoting oligosaccharides from these underused streams.

Could plants also be a source of oligosaccharides? That, too, is under exploration by researchers at the UC Davis Foods for Health Institute including Professor Kent Bradford with the UC Davis Department of Plant Sciences and director of the UC Davis Seed Biotechnology Center.
Stay tuned.

Tip of the iceberg

The magic of mother’s milk goes beyond oligosaccharides. New research from biochemists Carolyn Slupsky and Bo Lönnerdal, both of the UC Davis Department of Nutrition, indicate that formula-fed infants not only develop different communities of bacteria in their guts than breast-fed babies, they also experience metabolic stress that could make them more susceptible than breast-fed infants to health issues such as obesity, diabetes, liver problems and cardiovascular disease.

Slupsky and her team are now working to compare how compounds in breast milk differ between woman and at different times during lactation, as well as how different formulas with varying nutrient content affect infant metabolism.

So there’s still a lot to learn. But breast milk is already providing researchers intriguing clues to lasting health.

As German said, “By decoding mother’s milk, this astonishing product of evolution, we’re learning so much about diet, nutrition and how to stay healthy in the 21st century.”