Ranchers will be immediately impacted by severe drought, and most face lack of forage.

As California braces for record drought, ranchers are among the most immediately impacted, and most say they are not ready for the severe water shortages and lack of forage that drought would bring, according to a new study by researchers at the University of California, Davis.

A statewide survey and follow-up interviews by the research team document a deep and growing concern over the severe conditions facing the ranching community. More than one-third of interviewed ranchers expect devastating impacts to their operations if drought conditions persist.

UC Davis postdoctoral researcher Leslie Roche and colleagues surveyed 511 ranchers across the state about their management decisions, including how they respond to drought. She is following up the survey with in-depth interviews to dig deeper into the specific factors affecting each ranching family and, so far, has met in person with more than 60 ranchers across California.

“Last year’s drought has really been on a lot of people’s minds,” said Roche. “But because this winter drought has hit so hard, it’s an extremely prominent concern among ranchers right now.”

She noted that ranching is often the sector of California agriculture that is most vulnerable to drought because it depends on rain-fed systems, rather than stored water or groundwater.

In 2013, California experienced its driest year on record, and the state’s current snowpack is just 17 percent of average. As a result, the state government and the U.S. Department of Agriculture have declared drought emergencies for California.

A statewide drought, such as the one that occurred from 1976 to 1977, would today exacerbate the effects of earlier regional droughts, according to many of the ranchers who responded to the UC Davis survey. With already conservative numbers of cattle in their herds, ranchers must now consider culling their herds to stay afloat as production costs rise.

California ranchers are accustomed to surviving drought. With a Mediterranean climate, drought conditions occur for about four months every year during the summer dry season. The last two winter wet seasons, however, have been below normal, forcing many ranchers to already implement drought plans. Most ranchers interviewed said that three to four of the last 10 years have been in drought. When asked if they consider themselves adaptive managers, almost all said, “you have to be.”

“Multi-generation ranchers, who have been viable in this state for a long time, have a lot to tell us from their own experience,” said Ken Tate, a plant sciences professor and a Cooperative Extension rangeland watershed specialist, who is working with Roche.

“They have to have flexibility and options in order to adapt,” Tate said. “Those who have less flexibility — fewer types of forage, fewer places to go with cattle — tend to be the ones having a harder time adapting to drought because their ‘toolbox’ is smaller.” 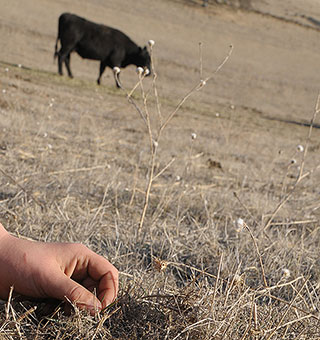 A lone blade of green grass suggests that drought is upon the rangeland, where ranchers fear a lack of water and forage. (photo: Tracy Schohr/UC Davis)

The UC Davis research team discovered that 99 percent of the ranchers surveyed depend on other ranchers as a trusted source of information. The team’s participatory research is tapping into that knowledge and experience so that it can be shared widely to the benefit of other ranchers, as well as policymakers and researchers. The survey is connecting campus directly to ranchers, opening up a wealth of research opportunities that will shed light on what management practices under what conditions work best for California ranchers. Through this study, state and federal resource-management agencies and drought-assistance programs are gaining a better understanding of what drought and other important issues mean to the ranching industry.

Information on how ranchers are dealing with the drought now is giving others in the agriculture industry a comparison of how extensive the drought’s impacts will be for them later.

“Other folks in ag are watching,” said Tate, “because they’re looking to planting time coming up soon for the summer crops, and they don’t know how much water they’re going to get.”

Other researchers involved in the study are Mark Lubell and Tracy Schohr of UC Davis, Justin Derner of the USDA Agricultural Research Service, Bethany Cutts of the University of Illinois at Urbana-Champaign and Lynn Huntsinger of UC Berkeley. The project is funded by the National Institute of Food and Agriculture, and the survey was conducted in partnership with the California Cattlemen’s Association and the California Farm Bureau Federation.

More information about the survey can be found online at the Rangeland Watershed Laboratory.

UC Davis Wants Samples of Your Fermented Foods for Science

The Lowdown on Home Food Fermentation