If you had a super power that allowed you to transform into any plant, what plant would you turn into?

Interns working for the UC Davis Arboretum and Public Garden’s edible landscape project pondered this at one of their more recent weekly meetings. They used to answer more mundane questions about their internship, but over the course of their time together, they’ve become a really tight-knit group and the questions have had to get a little more creative in order to eke out some new information about each other.

I recently interviewed one of these interns, Carli Hambley, about her experiences working on the project, and here’s what she had to say.

Carli is a sustainable agriculture and food systems major, just finishing up her freshman year at Davis. Before she even got to campus, emails about opportunities to volunteer and intern were being sent her way. Most she ignored, but the subject line of one in particular caught her eye, an email advertising the brand-new, yearlong edible landscaping internship. She says it looked like a cool opportunity that would be an interesting way to get to know her future campus and community.

Interns on this project work to design and build gardens that fall under the category of “edible landscaping,” which is, as you might expect, the act of growing food in gardens. 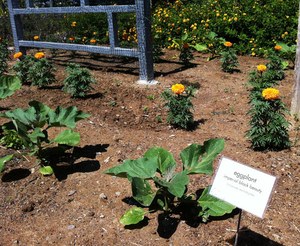 However, the project itself involves a lot more than just horticulture. Carli says that a lot of the work has been “out of the ground.” She’s had to talk to and coordinate with a lot of people to get her garden up and running. As this was the first year the internship had been offered, everyone involved was still figuring out how to get things organized. Therefore, interns spoke and worked with food experts outside the community to create a training packet for future use. The interns knew that food was already being grown and used on campus, so they knew there was a way to make this project run smoothly.

Their hard work has definitely paid off. Just a few weeks ago, Carli and her co-gardener got to start putting plants in the ground. Their garden is located near the Robert Mondavi Institute buildings on campus, in the Good Life Garden. They are growing squash, marigolds, peppers, eggplants, and beans and have built trellises for some of the plants to climb up.

The food from their garden will hopefully be going to the UC Davis Pantry, which provides meals to students in need.

Carli says that, beyond the horticultural skills she’s gained, the most important thing she’s learned while interning has been how to take initiative. The autonomy she has had over her project and the creativity she has put into it have taught her how to trust herself, push her ideas forward, and make them work. However, Carli claims that her absolute favorite thing about the project has been having the chance to work with other hard-working and passionate people

Carli will be continuing on next year as an internship coordinator. The application process for the next school year has just finished up and a number of new interns will be joining them in the fall.

Stacey Parker, a horticulturist at the Arboretum, is in charge of the edible landscape interns.

(This article was written by Kelsey Walker, an anthropology student at UC Davis, June 20, 2014, on Aggie Voices.)