Drought Slows Growth of Douglas Fir Trees Across the West

Whether growing along the rim of the Grand Canyon or living in the mist with California’s coastal redwoods, Douglas fir trees are consistently sensitive to drought conditions that occur throughout the species’ range in the United States, according to a study led by a researcher at the University of California, Davis.

The study, published Aug. 8 in the journal Proceedings of the National Academy of Sciences, provides direct evidence of the negative impact of water stress on forest ecosystems. It also pinpointed which conditions are causing low growth among Douglas fir trees.

“Warm, dry conditions can push these trees beyond their threshold of tolerance,” said lead author Christina Restaino, a postdoctoral researcher in the UC Davis Department of Environmental Science and Policy.

Stressed to the core

Restaino and her colleagues collected tree core samples in 122 locations across the West — from the Pacific Northwest, across the Rocky Mountain ranges and into California and the Southwest. The scientists then examined how growth rates have changed in the trees over a 91-year time frame, from 1916 to 2006.

Using climate data, they showed that as temperature increases in future decades, climate-induced stress is expected to increase and Douglas fir growth to decrease. Douglas fir trees are an ecologically and economically important commercial timber species. 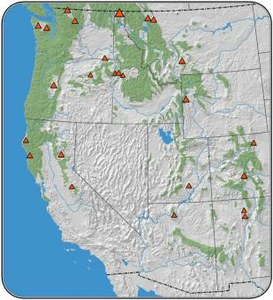 “Throughout the life of these trees, Douglas firs have experienced a lot of different conditions,” Restaino said. “The conditions that have been the warmest and the driest have slowed their growth the most. With climate change, we expect the frequency of those conditions to increase.”

Co-authors on the study included David L. Peterson with the U.S. Forest Service’s Pacific Northwest Research Station in Seattle, Washington; and Jeremy Littell from the U.S. Department of the Interior’s Alaska Climate Science Center in Anchorage.

The study was funded primarily by the National Science Foundation, as well as by the U.S. Geological Survey Global Change Research Program, the U.S. Forest Service Pacific Northwest Research Station, and the U.S. Department of the Interior Alaska Climate Science Center.