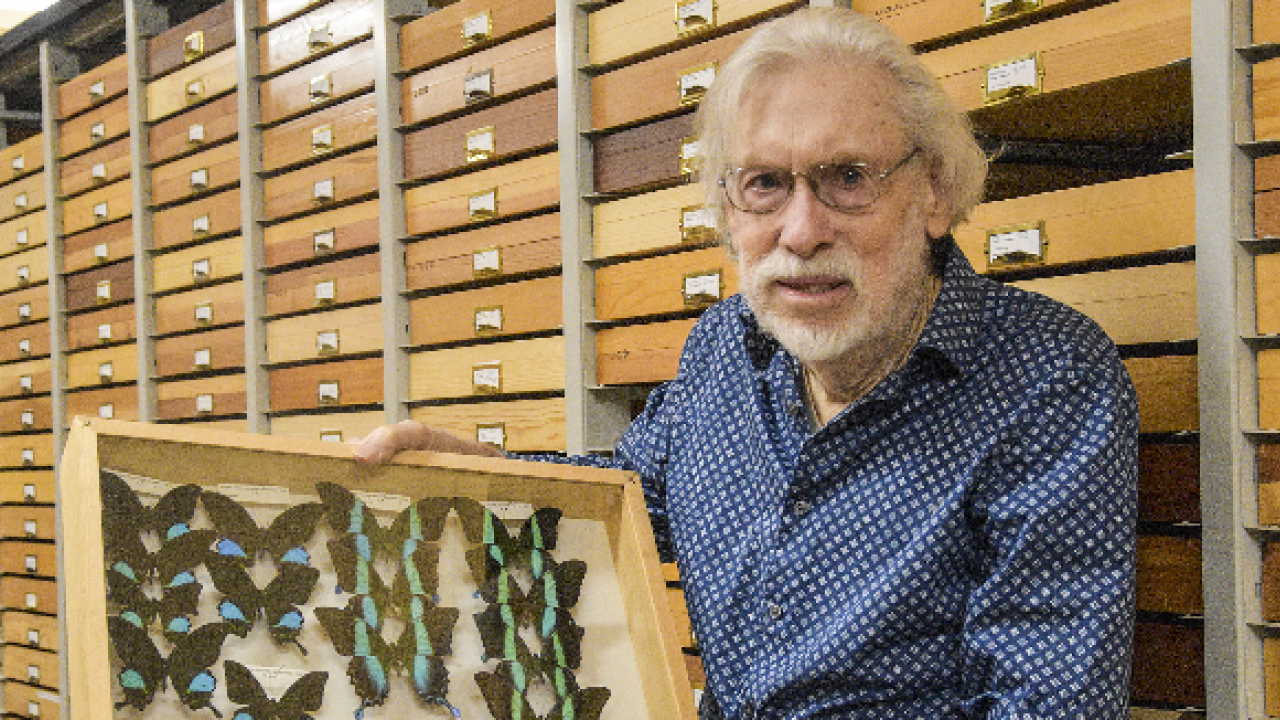 Bill Patterson, longtime butterfly collector and supporter of the University of California, Davis, is giving $1 million to the university’s R.M. Bohart Museum of Entomology to help maintain its permanent insect collection. This gift will provide the museum with the necessary financial security to support its ever-growing collection.

“I hope my donation will help educate the community about the importance of butterflies and moths,” Patterson said, adding that with this gift, his aim is to benefit researchers and the museum’s extensive collection of almost 8 million insect specimens.

Patterson has been a museum volunteer since 1993, contributing to the California Insect Survey, a storehouse of the insect biodiversity in California. He has also donated his personal foreign butterfly collection for student and research use. Patterson plans on supplying the rest of his collection, almost 40,000 butterflies and moths, to the museum in the future.

“I believe scientifically valuable collections should not stay in private hands. The museum is the perfect place for my collection to be permanently protected and studied,” said Patterson, who lives in Sacramento with Doris Brown, his wife.

Lynn Kimsey, professor of entomology and the museum director since 1989, said their vast and diverse collection requires intense, hands-on labor.

“Bill’s gift is a huge contribution and it’s really sweet of him to give during our most challenging years,” Kimsey said. “It’s going to give us working capital to support a much-needed full-time position, as well as ensure that we have essential supplies.”

Founded in 1946 by and named after the late Richard Bohart, a professor of entomology, the museum houses the seventh largest insect collection in North America. It also serves most of Northern California through its educational outreach programs and provides identification services across the nation.

Before the pandemic, more than 15,000 children, parents and teachers visited the museum annually. Kimsey said she hopes the museum will reopen to the public soon.

A hobby that never fades

Patterson’s lifelong hobby of collecting moths and butterflies began at age 6, when his mom gave him a butterfly net. Now in his early 80s and retired, he’s still an avid collector.

“I remember always going to this great big bush in the field next door to my childhood home in 1951 and seeing all these little butterflies flying around,” Patterson said. “My father also had a collection of butterflies in the attic that I later added to my own.”

This childhood interest led Patterson to study entomology at the University of Arizona. He eventually made his way to UC Davis to work as a technician for Howard McKenzie, an entomology professor from 1958 to 1968, the year of McKenzie’s death.

“I was a member of the Delta Sigma Phi fraternity in Arizona and founded a chapter in Davis. They needed people to fill up rooms in their house so some of my best memories in Davis were just living with the guys and getting to know this nice group of people,” Patterson said.

Patterson later earned his teaching credential at Sacramento State University and spent 15 years working as a math and science substitute teacher. He was also an active volunteer for the Sierra Club and the California Native Plant Society.

“I’ve seen what a great operation the Bohart Museum is, and the people here have been very helpful right from the start,” Patterson said. “I always feel welcomed and enjoy helping out in any way I can.”