The devastating disease Huonglongbing, or citrus greening, looms darkly over the United States, threatening to wipe out the nation’s citrus industry, whose fresh fruit alone was valued at more than $3.4 billion in 2012.

Recently, however, a research team led by a University of California, Davis, plant scientist used DNA sequencing technologies to paint a broad picture of how citrus greening impacts trees before they even show signs of infection, offering hope for developing diagnostic tests and treatments for the currently incurable disease.

“Florida is seemingly in the death grip of citrus greening, and many experts believe it is just a matter of time before the disease appears full force in California,” said plant molecular biologist Abhaya Dandekar, lead author on the study.

The new findings indicate that the bacterial disease interferes with starch and sugar metabolism in young and mature leaves and fruit, while also wreaking havoc with hormonal networks that are key to the trees’ ability to fend off infections. Study results were reported Sept. 25 in the journal PLOS ONE.

“Because the disease has a long latent phase during which there are no symptoms of infection and the bacteria are resistant to being grown in the laboratory, the only option for halting transmission of citrus greening has been to apply chemical pesticides to control the insect that spreads the bacteria,” Dandekar said.

HLB, or citrus greening, is the most destructive citrus disease worldwide. It is caused by three species of the Candidatus Liberibacter bacteria, including Candidatus Liberibacter asiaticus, which is known by the abbreviation CaLas. These bacteria are carried from tree to tree by two species of the citrus psyllid, a winged insect that is about one-eighth of an inch long and attaches itself to the underside of the trees’ leaves. 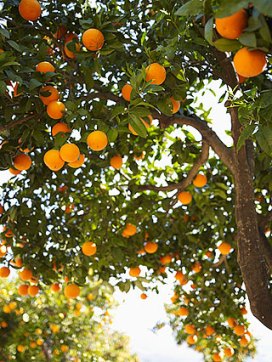 The findings indicate the bacterial disease interferes with starch and sugar metabolism in young and matures leaves and fruit.

As the citrus psyllid feeds on a leaf, it can pick up the bacteria from a diseased tree and introduce the bacteria to a non-infected tree. These disease-causing bacteria reside in the tree’s phloem — the vascular tissue that carries vital nutrients throughout the tree.

The disease affects most citrus species, causing yellowing of shoots, blotchy and mottled leaves, lopsided and poorly colored fruit and loss of viable seeds. The fruit of diseased trees is hard, misshapen and bitter, and the infected trees die within a few years.

Other than one infected backyard tree found in 2012 in the Southern California community of Hacienda Heights, the disease has not been detected in California. However the citrus psyllid that transmits the bacteria was first found in California in 2008 and has since been identified in San Diego, Imperial, Riverside, San Bernardino, Orange, Los Angeles, Ventura, Santa Barbara, Kern and Tulare counties, resulting in quarantines and restricted areas.

In this new study, the researchers studied four categories of healthy and diseased citrus trees, with the goal of better understanding how HLB affects trees physiologically during the very early stages of infection.

“Earlier sequencing of the CaLas bacteria genome showed that there were no toxins or enzymes that would destroy plant cell walls, or specialized secretion systems associated with citrus HLB,” Dandekar said.

“Because these factors, which normally accompany plant diseases, were not present, we suspected that the disease was causing metabolic imbalances or interfering with nutrient transport in the infected trees,” he said.

The researchers used gene sequencing technology to study the “transcriptome,” which is the collection of RNA found in the tree leaves and fruit.

Their analysis confirmed that in infected trees, HLB disease caused starch to accumulate in the leaves, blocking nutrient transport through the phloem and decreasing photosynthesis. They also found that normal metabolism of sucrose, a sugar also key to photosynthesis, was disrupted.

Furthermore, the researchers discovered that HLB interfered with the regulation of hormones such as salicylic acid, jasmonic acid and ethylene, which are “the backbone” of the plant innate immune response. And they found that infected trees also had changes in the metabolism of important amino acids that serve as a reservoir for organic nitrogen in many plants. The nitrogen is required to stimulate the plant immune response.

The researchers anticipate that these discoveries will lead the way to new tests for detecting the bacteria and thus the presence of HLB in orchard trees.

They also suggest that it may be possible to develop several short-term treatments for infected trees. Such therapeutic procedures might rely on using hormones and other small molecules to restore the infected tree’s normal metabolism or boosting the tree’s innate immune response to effectively fight the infection.