More than a decade ago, Ruihong Zhang, a professor of biological and agricultural engineering at the University of California, Davis, started working on a problem: How to turn as much organic waste as possible into as much renewable energy as possible.

“It has been the thrust of my research to bring the innovations we made possible at UC Davis to commercial scale,” Zhang said. “This technology can change the way we manage our solid waste. It will allow us to be more economically and environmentally sustainable. I am proud and grateful to be a part of the team who helped make this moment a reality."

It is the third commercial biodigester CleanWorld has opened using Zhang’s technology within the past two years and is the nation’s largest anaerobic biodigester on a college campus.

The system is designed to convert 50 tons of organic waste to 12,000 kWh of renewable electricity each day using state-of-the-art generators, diverting 20,000 tons of waste from local landfills each year.

The facility took unique advantage of its location at the now closed UC Davis landfill by blending landfill gases — primarily methane — with the biogas to create a total of 5.6 million kWh per year of clean electricity. It is expected to reduce greenhouse gas emissions by 13,500 tons per year.

The READ BioDigester encompasses several of the university’s goals: reducing campus waste in a way that makes both economic and environmental sense, generating renewable energy, and transferring technology developed at UC Davis to the commercial marketplace.

“The biodigester is the latest chapter in UC Davis’ world-renowned legacy of environmental sustainability,” said Linda P.B. Katehi, chancellor of UC Davis. “This project stands as a model public-private partnership and demonstrates what can be achieved when research universities and private industry collaborate to address society’s most pressing challenges.”

The project is decidedly homegrown: Campus waste is converted into renewable energy for the UC Davis electrical grid using technology invented by a UC Davis professor and licensed by CleanWorld. The company’s chief executive officer Michele Wong and vice president of research and development Josh Rapport are UC Davis alumni. Rapport received his doctorate in anaerobic digestion from UC Davis under Zhang’s tutelage in 2011.

“There is so much to celebrate today as we recognize the far-reaching environmental and sustainability impacts this technology will have,” Wong said. “It will enable the more than 100 million tons of organic waste each year that is currently being landfilled in the U.S. to be converted to clean energy and soil products. CleanWorld is proud to be the commercialization partner with Dr. Zhang and UC Davis for these game-changing innovations. With this project, we've crossed the bridge from research and development to commercialization and proven that CleanWorld’s high-solid AD system can be a feasible, cost-effective, and repeatable solution, not only for municipalities and communities, but also for universities and public institutions throughout California and the U.S.”

The READ BioDigester is a closed loop system, moving from farm to fork to fuel and back to farm. Whatever is not turned into biogas to generate renewable electricity can be used as fertilizer and soil amendments — 4 million gallons of it per year, which could provide natural fertilizers for an estimated 145 acres of farmlands each day.

Nearly half of the organic waste, or feedstock, needed to operate the biodigester to full benefit will come from UC Davis dining halls, animal facilities and grounds. CleanWorld is working with area food processing and distribution centers to supply the remaining amount. Meanwhile, UC Davis will earn 100 percent of the project’s green energy and carbon credits and receive all of the electricity generated.

Anaerobic digestion is an age-old process. However, Zhang’s patented technology made it more efficient — capable of eating a broader variety and bigger quantity of waste, turning it into clean energy faster and more consistently than other commercial anaerobic biodigesters. 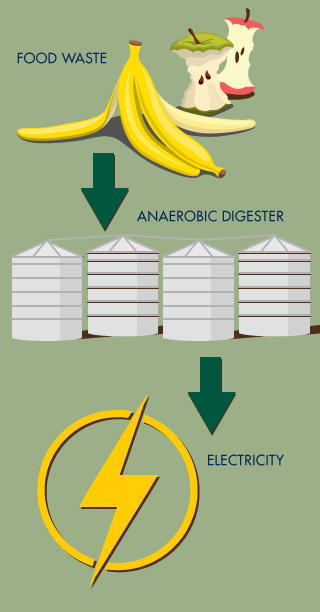 Campus and community food and yard waste will be put inside large, white, oxygen-deprived tanks. Bacterial microbes in the tanks feast on the waste, converting it into clean energy that feeds the campus electrical grid. (graphic: Russ Thebaud/UC Davis)

The project benefits from a unique public-private partnership. While Zhang moved the technology forward, CleanWorld’s commercializing efforts have made it modular, cost-effective and faster to deploy, making it one of the most advanced, commercially available anaerobic digestion systems in the country. The READ BioDigester, for example, went from bare ground to full installation within six months. Its $8.5 million cost was roughly two-thirds less than other anaerobic digesters the university researched as potential renewable energy sources.

CleanWorld financed the majority of the project with private equity and a commercial loan with First Northern Bank. Approximately $2 million in public funding came from the U.S. Department of Energy and the California Energy Commission.
CleanWorld’s other two biodigesters are in the Sacramento area:

·     The Sacramento BioDigester opened in December 2012 and can digest 25 tons per day. Construction is underway to expand its size to digest 100 tons per day and produce 700,000 gallons per year of renewable compressed natural gas, fueling both public and private fleets.

·     The American River Packaging BioDigester in Natomas opened in April 2012. It can convert 10 tons of waste per day and generates roughly 1,300 kWh of energy daily.

CleanWorld is the leading North American innovator of advanced, high-solids anaerobic digestion (HSAD) technology. CleanWorld’s BioDigesters represent a generational leap forward in anaerobic digestion technology, dramatically reducing the time and cost of construction, commissioning and operation, while increasing output, efficiency, and revenue opportunities. A subsidiary of Synergex, a global leader in technology for more than 35 years, CleanWorld was founded and is managed by people committed to the idea that our precious organic resources should never be wasted.

UC Davis is a global community of individuals united to better humanity and our natural world while seeking solutions to some of our most pressing challenges. Located near the California state capital, UC Davis has more than 34,000 students, and the full-time equivalent of 4,100 faculty and other academics and 17,400 staff. The campus has an annual research budget of over $750 million, a comprehensive health system and 13 specialized research centers. The university offers interdisciplinary graduate study and 99 undergraduate majors in four colleges and six professional schools.