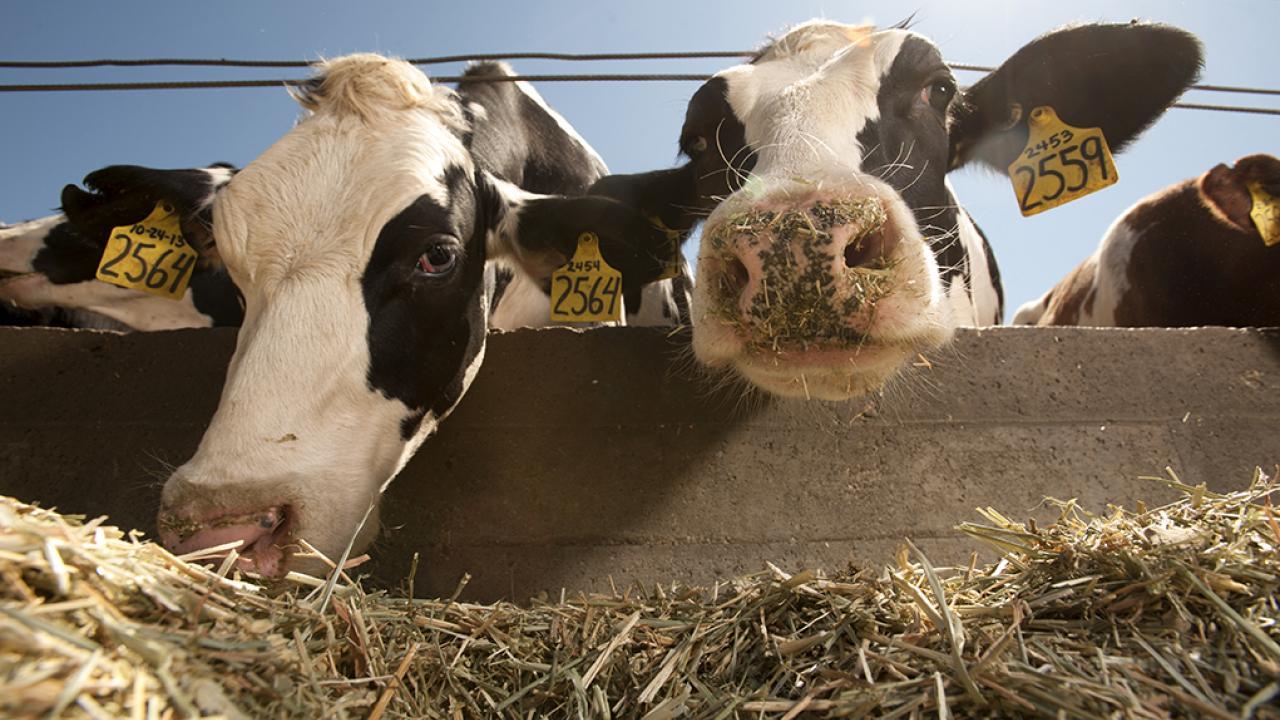 Hoofing IT at the Dairy Barn

This story is courtesy of the UC Davis Big Ideas.

According to Fitbit’s website, more than 76 million of the fitness devices have been sold worldwide. And that’s just one brand of many in the booming industry of wearable health trackers.

So logically, the next step would be to design Fitbits for cows, right? At UC Davis –– home to the top agricultural program in the nation –– that’s exactly our next step.

Professor Cassandra Tucker of animal sciences has been working with cows at the UC Davis Dairy Teaching and Research Facility to help improve animal welfare through the use of accelerometers. These accelerometers, or “cow Fitbits,” are placed around the neck of the cow like a collar or hung as an ear tag. The wearable technology offers the potential to amplify care and animal welfare for improving the lives of animals ––especially as it pertains to the products we use in our food.

Tucker, one of the faculty members of the Smart Farm Big Idea, said the accelerometers are great for detecting early symptoms of illness or distress in the cows. Real-time tracking allows information from the cow collar to be transmitted to an antenna and then eventually to the manager’s computer. The program also transmits alerts when the animal has a change in health status, but Tucker said they also compare and contrast the data with what her team observes in person.

“What I find most inspiring about the Smart Farm Big Idea is how technology is being used to amplify animal care,” Tucker said. “By putting technology on the animals, it gives farmers other tools –– it gives them a way to monitor the animals in ways that they wouldn't otherwise have. We have the opportunity to improve both animal welfare and our management of the environments in which we farm.”

The collar technology monitors how the animal moves and can show how much an animal ruminates -- chews its cud. Tucker says changes in movement and chewing are good early indicator of illness in an animal, before it is apparent to the farmer.

“There are times that we recognize a disease, but since we didn’t catch it sooner, the animals are not as responsive to the antibiotic treatments,” Tucker said. “Early detection often results in a better prognosis for the animal and often allows for more efficacious treatment.”

Tucker said she hopes the Smart Farm Big Idea will bring in funding for endowed chairs, a computer scientist and agricultural engineers, who could build and test these types of technologies under the UC Davis banner.

Moving forward, Tucker would like to see more research done on the user side of the program for the accelerometers, making the data easier to interpret and possessing the ability to have different wearable brands talk to each other on the data interface.

“We want to continue to test the collars to ensure they are generating information that really aids the farmer rather than just sending them a lot of alerts or overloading them with information,” Tucker said. “But the use of this technology is a really exciting innovation for agriculture and animal welfare.”