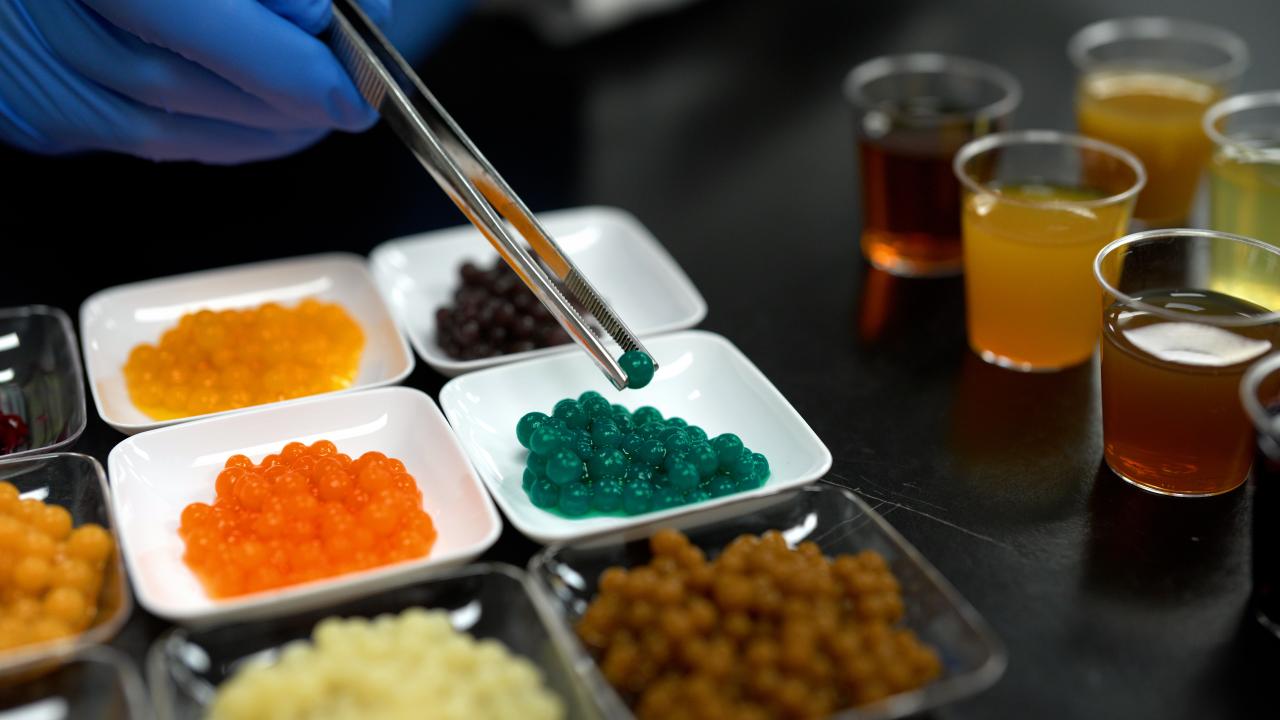 Farms to Fungi to Food: Growing the Next Generation of Alternative Protein

A solution to world hunger might start with boba and caviar.

Using an innovative process, engineers at UC Davis are growing “myco-foods” — small balls of edible fungi that can be processed into products like boba and lab-grown caviar with a wide range of textures, colors and flavors. These myco-foods, grown from the nutrients of agricultural byproducts like coffee grounds and almond hulls, provide an important new source of protein to feed the world.

Agricultural byproducts often contain many of the same nutrients as the main products, so re-using them reduces waste while adding more value to the existing materials.

“Generally, these byproducts go to composting or a digester, but I think this gives us one more option,” said biological and agricultural engineering doctoral student Lin Cao. “Fungi can use all kinds of byproducts, which is very good because we can produce food sustainably and also lower the cost of fungal cultivation.”

Eating fungi is nothing new, as mushrooms are a staple of diets around the world, but the team still thinks it has untapped potential. Myco-foods are rich in protein and can be cultivated anywhere using a fraction of the space required for traditional agriculture. Project lead and Professor Ruihong Zhang, Department of Biological and Agricultural Engineering, thinks they will eventually be important for developing countries that need food production to catch up with growing populations.

“We’re very efficient in terms of energy and water, and we’re not influenced by climate to set up fermenters, so it could be set up to produce anywhere in the world,” she said.

The lab had first worked with the filamentous fungus Aspergillus awamorifor wastewater treatment before realizing its potential as food.

In the same way that A. awamori removes toxins from wastewater by eating them, it absorbs the leftover nutrients from byproducts and takes on their color, flavor and nutritional value as it grows. So far, the team has grown myco-foods from the byproducts of coffee, pomegranates, carrots, tomatoes, red beets, cheese, almonds and walnuts.

“These fungi eat everything — sugar, organic acid, organic matter — so they have a lot of applications,” said Zhang. “[We thought that] if we can actually create food and not just use them for environmental applications, that would be even higher value.”

The first step is creating an extract. The byproducts, which are donated by the lab’s industry partners, are put in beakers with water and vigorously shaken to dissolve all the nutrients and sugars. Chemistry doctoral student Cody Yothers likens the process to making tea.

The extract is then combined with A. awamori spores in a warm bioreactor and stirred constantly. In a couple of days, the spores grow and begin to form perfectly round mycelium balls. Another strain of koji fungus, Aspergillus oryzae, has also been used.

Depending on the goal, the balls can be eaten as is or coated with gelatin, agar or alginate and grown a second time to get a range of textures and mouthfeels. They can also be freeze-dried for a soft and spongy texture, sweetened or turned into a scaffold for cultured meat products.

Over the past two years, the team has refined their process by comparing the texture of their myco-foods with commercially-available boba made from tapioca starch and with real caviar. Both the human sensory testers and the data from a texture analyzer agreed that they were incredibly close.

“Our patented technology is the production of these balls to have a texture, flavor and nutritional composition consumers want,” said Zhang.

Though the team’s initial focus was making healthy, shelf-stable boba, they’ve since expanded.

“We don’t just want to replace boba, we want to develop a range of new food products,” said Zhang. “I see putting it into a drink or beverages for bubble-tea types of products, but I could also see it as a terrific topping for cakes, so it has different applications for [different] types of food.”

Since 2021, the team has worked with Davis-based startup Optimized Foodsto bring myco-foods to shelves around the world, starting with cultured caviar. Using the fungi’s form, function and structure, they can affordably and sustainably grow sturgeon stem cells and create a sustainable version of the world’s most expensive food. CEO Zane Starkewolfe aims to get FDA approval by the end of 2023 and be at the forefront of the cultured meat revolution.

“This is really just the beginning,” he said. “This innovation allows us to grow and nourish all types of cultivated meat products and make delicious, nutritious and scalable foods while having a significant impact on the environment.”