These important endowed faculty positions are made possible only by the generosity of donors who believe strongly in the need to support an area of study that will benefit society. The minimums required to establish faculty endowments are:

The Sesnon Endowed Chair in Animal Science supports a distinguished animal scientist who provides leadership in undergraduate and graduate teaching and in research for the Department of Animal Science. The chair holder is expected to have made distinguished research contributions in the field of animal science relevant to the biology and production of livestock or aquaculture species.

The Ernest Gallo Endowed Chair in Viticulture and Enology was established to support excellence in research for a faculty member pursuing scientific advancement in the fields of enology and viticulture.

The purpose of the Peter J. Shields Endowed Chair in Dairy Food Science is to provide continuous support for the chair holder to allow for the conduct of exemplary research, teaching, and continuous interaction with the dairy food industry.

In 1986, Will W. Lester established an endowed chair to advance research in the field of pomology. Mr. Lester received his undergraduate degree in horticulture from UC Davis in 1940. Following his service in World War II, he resumed his role as an orchardist with Lester & Lester in the Santa Clara Valley and became an active cooperator with UC Cooperative Extension. He developed new irrigation methods and innovative practices in fruit drying, and field tested newly developed insecticides. He also served as director of the Cal Aggie Alumni Association and as a trustee with the UC Davis Foundation.

The purpose of this professorship is to provide funding for research that will enhance, accelerate, and ensure the development of new and improved canning peaches, processing peaches, and peach-like varieties adapted to the Sacramento and San Joaquin valleys. Goals include using plant hybridization and genetic manipulation to provide the greatest varietal improvement, gain, and benefit to the California peach industry at the least cost and shortest time.

Through his estate, Daniel Barton DeLoach established an endowed chair for the purpose of conducting research and teaching the economics of transporting agricultural and related products. DeLoach also gave generously to support undergraduate scholarships for students pursuing degrees in agricultural economics. In 1958, after a successful career with the U.S. Department of Agriculture, in which he rose to chief of the Margins and Cost Branch, DeLoach became a UC professor of agricultural economics, first serving at UCLA and then at UC Davis until he retired in 1971.

The John E. Kinsella Chair in Food, Nutrition and Health was established in 1994, after Dean Kinsella’s passing. The endowment was created using funds provided by General Foods that originally supported the late Professor Kinsella’s research in food science and human nutrition, with specific focus on the interrelationships between food, nutrition, and health. In keeping with Kinsella’s long-standing support and cultivation of junior faculty, the Kinsella Chair recognizes outstanding faculty members during the development stages of their careers.

Even modest changes in agricultural practices and wetlands management can bring enormous benefits for the 20 percent of the nation's geese, swans, and ducks who live in or migrate through California's Central Valley. The birds reciprocate by helping farmers control weeds and mosquitoes. The Raveling Endowed Chair in Waterfowl Biology helps faculty pursue both basic research and its applications in farming, business, and public policy. The endowment enables the faculty holder to put graduate students into the field quickly and get vital research done.

The Anheuser-Busch Professorship in Malting and Brewing Sciences was established in 1996 by the Anheuser-Busch Foundation. The purpose of this professorship is to provide a permanent source of funding for teaching and research in malting and brewing sciences. A tenured faculty member shall hold the position, and should have a demonstrated passion for the brewer’s art and a scientific background in microbiology, biochemistry or food science. In addition to financially supporting the faculty professorship holder, the intent of the endowment is to also support students in their training in malting and brewing research.

John Fiddyment, descended from Placer County farm pioneers dating back nearly 150 years, is the great-grandson of Elizabeth Jane Fiddyment who began farming in 1856. The John and Joan Fiddyment Endowed Chair in Agriculture supports research and teaching in the spirit of the Fiddyment family tradition of agriculture.

This endowed chair honors the late Marvin Sands, founder of beverage industry leader Canandaigua Industries Co., now known as Constellation Brands. When Marvin Sands passed away, his industry friends pledged more than $400,000 to establish an endowment in his honor in the Department of Viticulture and Enology at UC Davis. Major contributors include Southern Wine & Spirits of America, Inc., the Goldring Family Foundation, and Wirtz Corporation. Canandaigua Industries was established in 1945. It grew from a small bulk-wine producer in the northeastern U.S. to an international, diversified, multibillion dollar beverage company.

The Stephen Sinclair Scott Endowed Chair in Enology was originally set up in 1984 by the Scott family and Scott Laboratories, Inc. as a research endowment in Stephen’s memory. In 1998, a subsequent gift from Robert S. Scott (Stephen’s father) and Scott Laboratories, Inc. was made to the campus and the fund was amended to become an endowed chair in the department of Viticulture and Enology. Income from the Scott endowment is to be made available to the chair holder in support of his teaching and research efforts.

The Louis P. Martini Endowed Chair in Viticulture honors the memory of Louis Peter Martini, a pioneering winemaker who studied viticulture and enology at UC Davis. The chair is intended to support excellence in viticulture research. Louis P. Martini is the son of wine dynasty founder Louis M. Martini. Their winery was one of the first wineries established after the repeal of Prohibition in 1933. Louis P. Martini studied at Davis when it was known as the University Farm; he studied under the mentorship of Professor Maynard Amerine.

Alexander and Elizabeth Swantz established this endowed specialist position chair in Cooperative Extension to address current issues regarding water and water resources in California. The goal is to support the development of an integrated applied research and outreach education program that addresses critical issues regarding the management and stewardship of California's water resources. Given that innovation and change in agricultural and environmental sciences occur at a rapid rate, the Swantzes chose to leave specific designation of the Swantz Specialist in Cooperative Extension to the discretion of the dean of the UC Davis College of Agricultural and Environmental Sciences.

This chair was established through a gift from the James G. Boswell Foundation, which was founded in 1947 to support agricultural activities, including teaching and research. The Boswell family has had and continues to have a significant impact on California agriculture. The James G. Boswell Endowed Chair in Soil Science is one aspect of the Boswell family’s efforts to ensure that California agriculture stays on the cutting edge.

The holder of the Mars, Inc. Endowed Chair in Developmental Nutrition focuses on research and information dissemination in the area of developmental nutrition, specifically the influence of diet on embryonic and fetal development. Correction of nutritional deficiencies during early in utero development could result in marked reductions in pregnancy complications and birth defects.

Robert “Bob” Hagan challenged those interested in sound water policy to make a long-term investment in UC Davis. He saw a need for the academic community to provide additional assistance in this field and outlined how he would like UC Davis to serve decision makers in the water community. In keeping with his vision, the faculty member holding the Robert M. Hagan Endowed Chair in Water Management and Policy develops and applies new methods and approaches to the resolution of water problems through innovative combinations of science, policy, and management; responds to inquiries from concerned persons and groups such as water district directors and staff, elected officials, state and federal government, agriculture, business, and other stakeholder groups; facilitates access to information and experts; and brings information needs to the attention of appropriate people and groups that may lead to expanded or modified research activities of greater value to the public.

The W.K. Kellogg Endowed Chair in Sustainable Food Systems provides leadership for the Agricultural Sustainability Institute and the UC Sustainable Agriculture Research and Education Program. The holder of this chair leverages these entities with research and teaching to foster a safe, healthy, and accessible food supply while building a national network of leaders in sustainability.

The Russell L. Rustici Endowed Specialist in Cooperative Extension in Rangeland Watershed Science was established to give special recognition to the individual selected and to provide supplemental financial support for teaching, research, or outreach, or to provide long-term funding for on-the-ground research which investigates the connections between range management, water quality, hydrology, and related ecosystem processes.

The Russell L. Rustici Endowed Chair in Rangeland Watershed Science was established to give special recognition to the individual selected and to provide supplemental financial support for teaching, research, or outreach, or to provide long-term funding for on-the-ground research which investigates the connections between range management, water quality, hydrology, and related ecosystem processes.

Robert M. Dorn established this endowed chair to advance the science of infancy and the critical issues related to attachment. The Robert M. and Natalie Reid Dorn Endowed Chair on Infancy will support a faculty member who will collaborate widely with faculty from other disciplines on research that ultimately will help parents and caregivers to better meet the needs of infants. Dr. Dorn, a Davis psychiatrist who devoted his career to understanding and treating mental health problems that originate in the earliest years of life, created this chair to increase the likelihood that our youngest community members could get the best start on life.

This endowed chair supports a faculty member focused on the study of source, environmental fate, or consequence in the environment of chemicals that affect living organisms. This area of research is important for human health and environmental sustainability, and relates to the donor’s area of study at UC Davis. Dr. Charles J. Soderquist (MS ’73, PhD ’78) was a student of Professor Donald G. Crosby at UC Davis and credited him for the excellent education he received. Donald G. Crosby is Professor Emeritus of Environmental Toxicology. He joined UC Davis in 1961 to create the Department of Environmental Toxicology, now one of the finest departments of its kind. The first to develop a unique undergraduate major in environmental toxicology, Professor Crosby also conducted pioneering research into the environmental fate of pesticides.

This chair was established through gifts from the Schlinger Foundation. It was the intent of Evert and Marion Schlinger that this endowed chair attracts and sustains scholars and scientists working in the area of the systematics of insects, including arachnids.

This endowed chair was established through a bequest from John B. Orr, a former UC Davis maintenance shop employee. His intent was to “serve UC Davis and its students.” Half of his financial gift was dedicated to plant sciences and half to environmental sciences.

The purpose of this professorship is to provide a permanent source of funding for both basic and mission-oriented weed control research in rice and related cropping systems for the California rice industry. Melvin D. Androus was manager of the California Rice Research Board from its inception in 1969 until 1997. His leadership in California's rice research and promotion efforts has been critical to the industry's success. Androus served as chair of the California Commodity Commission for 13 years, represented California on the National Council for Agricultural Research, Extension, and Teaching (CARET) executive committee, and served on the Dean's Advisory Council in the UC Davis College of Agricultural and Environmental Sciences for 10 years. 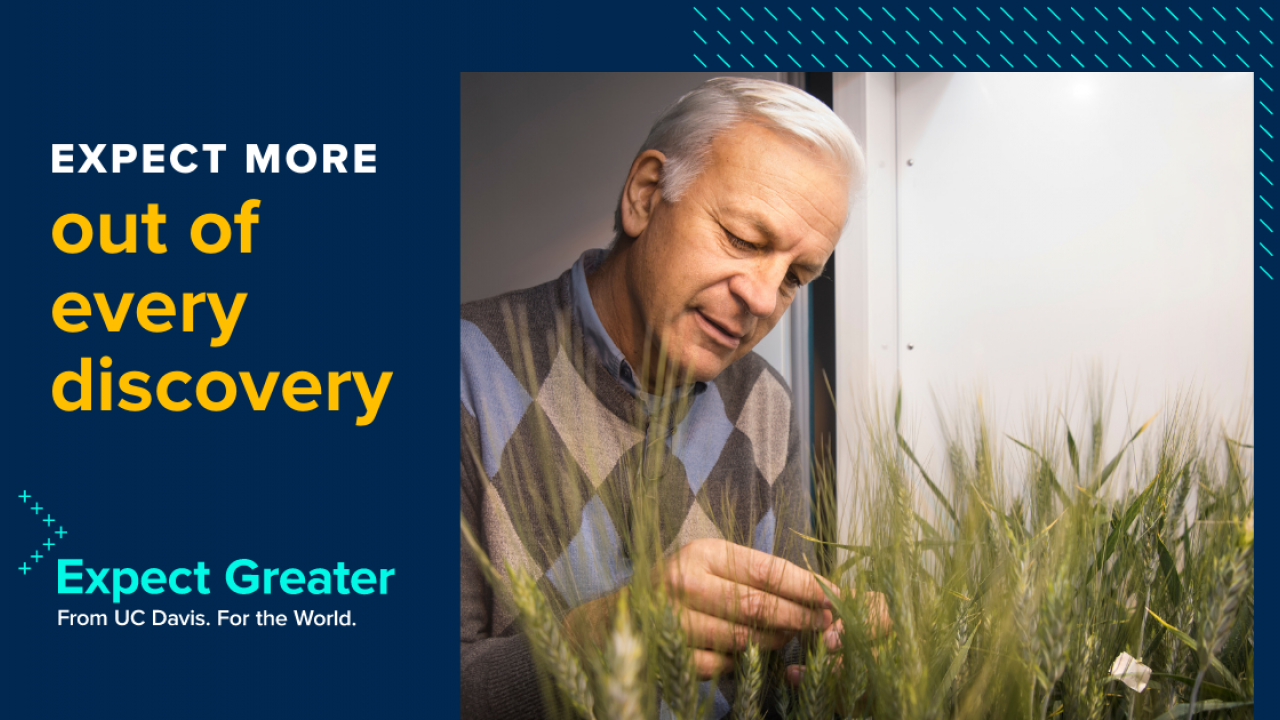